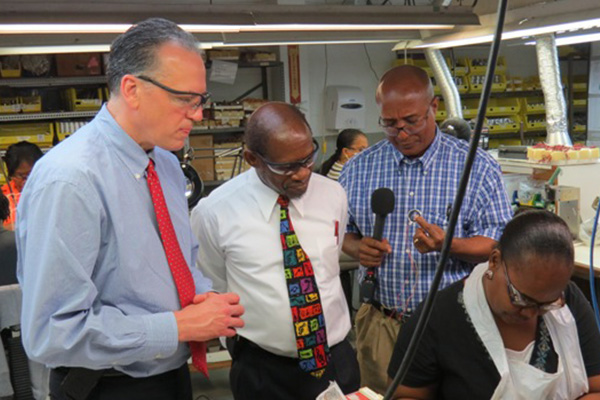 Basseterre, St. Kitts (CUOPM) – General Manager and Head of Global Operations at API’s World Headquarters in New York, Mr. Kevin Heffler says EC$250,000 is to be invested in the expansion of the company’s plant at Sandy Point.

Mr. Heffler made the disclosure after a tour of the site with Prime Minister the Right Hon. Dr. Denzil L. Douglas, Plant Manager, Mr. Carol Evelyn and Dr. Norgen Wilson.

“It was a fantastic tour meeting and it is a fantastic partnership between our company and the St. Kitts government for us to continue to move forward with our building expansion,” he said in an interview with the Communications Unit in the Office of the Prime Minister (CUOPM).

He described the planned expansion as a “good day for St. Kitts and it is good day for Sandy Point as we get started on the movement of this building expansion to bring more employment to our area.”

“We are making a capital investment of at least EC$250 thousand dollars to put in all the infrastructure in our facility including for electrical and air conditioning and give us the opportunity for us to expand into new markets that we have identified,” Mr. Heffler added.

He said “the skilled work force here in St. Kitts is ready and prepared to be able to build the products to meet the customer demand that we have in the market.”

“So we see a great opportunity for us to make that investment. That investment will return itself over the next several years as we continue to grow that business for years to come,” said Mr. Heffler.

“We are expecting to add somewhere in the vicinity of 30 to 40 additional associates in our facility,” said Mr. Heffler earlier.

The company manufactures resolver technology that is used in motors.

“We have a motors manufacturing building as well and we also do magnetic components which are called inductors. Those are passive electronic components and those are the three major product lines that we have and that we manufacture here in St. Kitts,” said Mr. Heffler, who added that the new space will add more capacity for the existing products.