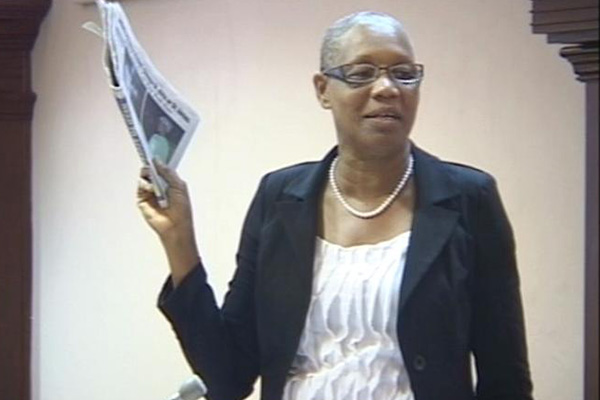 Health Care given prominence in 2014 budget

As noted by Prime Minister the Right Honourable Dr. Denzil Douglas in his 2014 Budget Address, this represents a nine percent increase over the 2013 allotted amount.

“My Government recognizes health as a basic human right and a prerequisite to national development,” Prime Minister Douglas stated.  “We also subscribe to the philosophy that health care should be accessible to all of our citizens.  It is with this in mind that in 2014 the Ministry of Health will be rolling out the first phase of a Universal Health Insurance Scheme.”

During her budget statement Minister of Health, Honourable Marcella Liburd further outlined that the National Health Scheme will be all inclusive.

“As we are aware, we spend millions of dollars in this country on health costs,” Minister Liburd emphasized.  “Very often persons will go to the hospital and at the end of the day the bills are unpaid … And we genuinely believe that it is time for us to introduce a health insurance system that would help to underwrite some of the cost of these things.”

The Minister of Health further stressed that individuals who are insured under such a scheme, will now have the means to get annual check-ups privately and have coverage for chronic long-term illnesses.  She further revealed that due to the all inclusive nature of the insurance scheme, the first set of registrants would be from the most vulnerable groups in society.  Registration is scheduled to commence early in 2014.

As the Minister responsible for Community and Social Development, Minister Liburd elaborated on the Moulding Empowering Nurturing and Directing (MEND) Programme introduced by Prime Minister Douglas in his Budget Presentation.

“We are introducing the MEND Programme which is moulding, empowering, nurturing and directing families and you will notice we are trying to move away – in terms of the delivery of the service – from the individual to the family approach,” Minister Liburd stated.  “We think that in the end, this approach will be far more effective in reducing poverty which is the main thrust of these programmes.  We will bring the family together to ensure that someone is working, children are going to school and everyone is attending health centres for their health check-ups.  All this will be happening because there is some responsibility on the part of the family.”

Minister Liburd also mentioned the work to take place at the Pogson Medical Centre which would soon be upgraded to what is termed a smart hospital due to a Pan American Health Organsation (PAHO) and World Health Organisation (WHO) Smart Hospital Project.  She said the United Kingdom Department for International Development (DFID)-sponsored project would transition the Pogson Medical Centre into a safer, greener and more eco-friendly hospital.  Additionally, the Minister revealed that the Mental Health Day Care Treatment Centre was scheduled to commence next year.

In mentioning several bill which would be presented to parliament, including one specific to children, Minister Liburd stressed that the care of children is of particular concern to her ministry, and that the ultimate goal is to eventually reunite them with their families.

As Minister responsible for Culture, Minister Liburd also noted that the Government continued to invest in the National Carnival of St Kitts and Nevis.