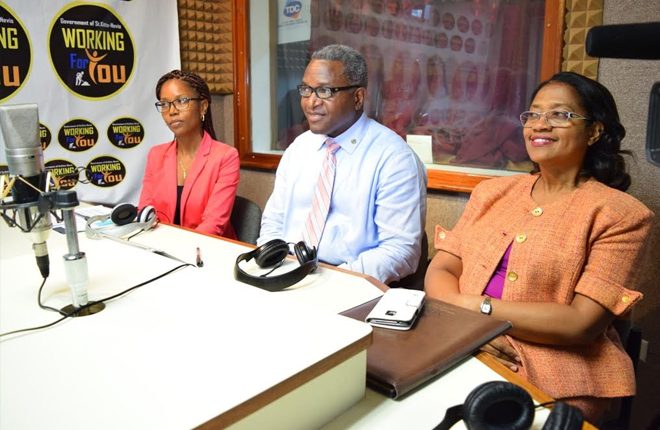 (SKNIS): During Wednesday’s edition of “Working for You”, (November 02) health officials, including Medical Chief of Staff at the Joseph Nathaniel France (JNF) General Hospital, Dr. Cameron Wilkinson; Chief Medical Officer, Dr. Hazel Laws; and Director of Community –based Health Services, Dr. Retna Walwyn Browne took the opportunity to dispel some of the myths that have been circulating about breast cancer.

Dr. Wilkinson said that the internet is often unreliable when it comes to debunking myths.

He explained that one myth includes persons thinking that breast cancer is contagious.

“Persons think that just because one person had it or somebody close to you would have had it, chances are that you would get it,” he explained, saying that there are a number of factors which are involved when it comes to getting breast cancer. “Just because a relative has it, that does not mean that you would have it as well.”

Dr. Wilkinson further explained that persons even cite reasons why they think that breast cancer is contagious.

“For example, if a woman is looking after her mother who has breast cancer and the daughter comes down with the breast cancer because of genetics, the aunt now is refusing to look after the daughter because she thinks that it is contagious,” said the medical chief of staff. “There are even husbands who are afraid to touch their wives, but it is not contagious, it is genetically inherited.”

The officials also touched on the myth that antiperspirants can result in breast cancer. Dr. Wilkinson said that there is no scientific evidence to prove that this is true.

There are no bras that can increase the risk of developing breast cancer and having lumps under your arms does not necessarily mean that one has breast cancer.

Dr. Wilkinson explained that it could just be a fatty tissue or a lymph node.

“As a doctor, you would take everything into context,” said Dr. Wilkinson.

The medical chief of staff said that there is also a belief that injuries can cause breast cancer.

“You may have had somebody who may have had a lash on their breasts and it was hurting them so they come to the doctor,” said Dr. Wilkinson. “If a lump is found and you remove it and you found it to be cancerous, they would erroneously make the link saying that it’s the injury that caused the cancer when it is because they paid attention to their breasts because of the injury, that’s why we noticed the lump. Even exercising around and jogging cannot increase your risk of developing breast cancer.”

Chief Medical Officer, Dr. Laws, made mention that there is a myth that women with small breasts cannot get breast cancer and that is inaccurate.

“We need all women to be aware of their breasts in terms of identifying any abnormal lumps, swelling, et cetera,” said Dr. Laws.

Director of Community –based Health Services, Dr. Walwyn Browne, said that the belief that all lumps are cancerous can lead to persons not seeking help from a doctor because they are afraid of the diagnosis.

She encouraged persons to get their breasts examined before they come to a conclusion.

The medical chief of staff said that persons believe that if they pray and fast and tithe, they cannot get certain diseases. He explained that even good people can get breast cancer.

Dr. Wilkinson said that persons should not be afraid of using a microwave in fear that they would get breast cancer.