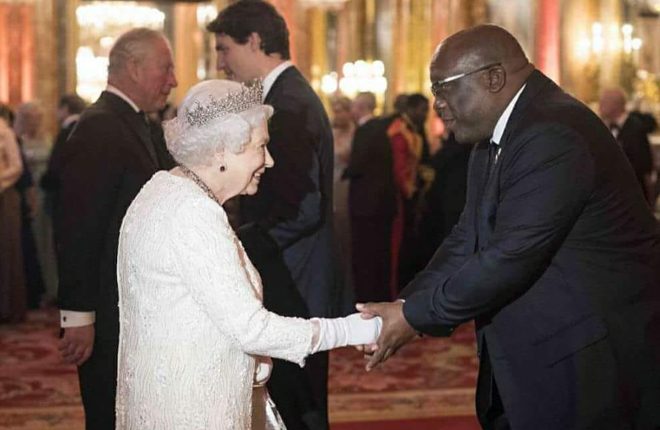 Her Majesty the Queen expresses ‘sincere wish’ for Prince Charles to one day lead the Commonwealth, and the leaders accede to her desire

(PRESS SEC) – St. Kitts and Nevis’ Prime Minister, Dr. the Honourable Timothy Harris, greeted Her Majesty the Queen yesterday, Thursday, April 19th, 2018, in the Blue Drawing Room at Buckingham Palace. Prime Minister Harris bowed in respect to the monarch as they paid gracious courtesies to each other at a dinner for the leaders of the Commonwealth.

Today, the leaders acceded to the Queen’s wish for His Royal Highness Prince Charles, the Prince of Wales to one day succeed her as the head of the Commonwealth.

Queen Elizabeth II has led the Commonwealth, which is a voluntary association of 53 independent and equal sovereign states, since 1952 following the death of her father, King George VI.

As Her Majesty the Queen formally opened the 2018 Commonwealth Heads of Government Meeting at Buckingham Palace on Thursday, she said, making reference to her eldest son, “It is my sincere wish that the Commonwealth will continue to offer stability and continuity for future generations and will decide that one day the Prince of Wales should carry on the important work started by my father in 1949.”

This announcement comes ahead of Her Majesty the Queen’s 92nd birthday tomorrow, Saturday, April 21st, 2018.

The Queen celebrates two birthdays each year: her actual birthday on April 21st and her official birthday on (usually) the second Saturday in June. http://time.com/5248082/queen-elizabeth-two-birthdays/

Her Majesty the Queen’s birthday party concert will take place tomorrow at the Royal Albert Hall. It will be broadcast live from 8:00pm (London time) on BBC One and BBC Radio 2.

The Queen’s Birthday Party is a BBC Studios’ Production for BBC One and BBC Radio 2.