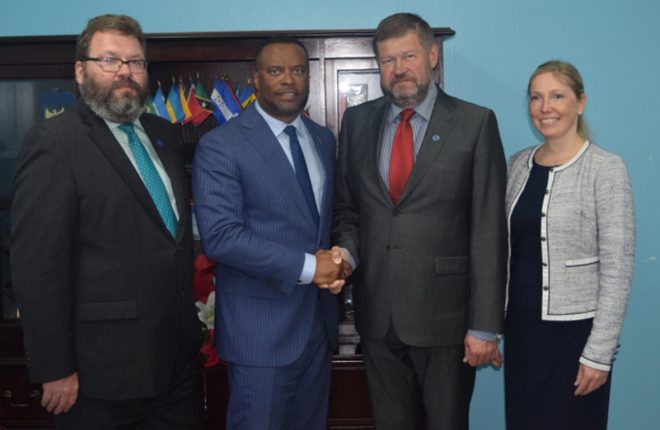 (SKNIS): Minister of Foreign Affairs and Aviation, the Honourable Mark Brantley, received a courtesy call from a delegation from Estonia with the aim to promote the candidature of Estonia for a non-permanent seat on the UN Security Council for the period 2020-2021, and to discuss the possibility of developing bilateral relations between Estonia and St. Kitts and Nevis on topical international issues including cooperation in international organizations.

The delegation was comprised of Mart Nutt, Member of Parliament and Member of the Advisory Committee of the President of the Republic of Estonia, on Estonia’s campaign for non-permanent membership of the UN Security Council; Margus Kolga, Ambassador-at-Large for the United Nations issues in the Ministry of Foreign Affairs; and Mari Tomingas, Desk officer of the Political Department of the Ministry of Foreign Affairs.

Foreign Minister Brantley, who is also Nevis’ Premier, warmly welcomed the delegation, as they engaged in robust discussions on bilateral cooperation.

“We are well aware of the importance of your country in the context of Europe and the European Union and certainly we have had interactions with Estonia in the past, most recently in our bid to be part of the UNESCO World Heritage Committee as we are very thankful to Estonia for its support in that regard,” noted Minister Brantley. “And so, it demonstrates that even though we are a small country we can find opportunities and common grounds where we can cooperate and I am sure that as we go into our meeting we will have an opportunity to discuss areas that we can deepen and strengthen that cooperating.”

Premier Brantley assured the delegation of the value St. Kitts and Nevis places on the relationship between both countries, as the federation does with the rest of Europe. It is hoped that “these relationships can be strengthened through dialogue and discussions to an ongoing engagement” with Estonia.

Mart Nutt expressed thanks to Minister Brantley for the opportunity to meet and engage in meaningful discussions. He also expressed thanks to the Government of St. Kitts and Nevis for its support for Estonia becoming a non-permanent member of the UN Security Council. Mr. Nutt explained why Estonia is desirous of becoming a member.

“There are many important issues that are not only important for Estonia but also for many other countries,” said the Member of Parliament. “One, Estonia is a small country and small countries understand problems of small countries much better than big countries and so I am sure that Estonia can represent the interest of all small countries in the security council; two, Estonia has been before in that organization and so it gives us a good experience…and so we are sure that we have an important role to give for the world concerning stabilization of international relations.”

He added that Estonia’s advanced Information Technology (IT) system and the country’s experience with e-Government can be very important for other countries, as well as in the United Nations and especially the UNs Security Council.