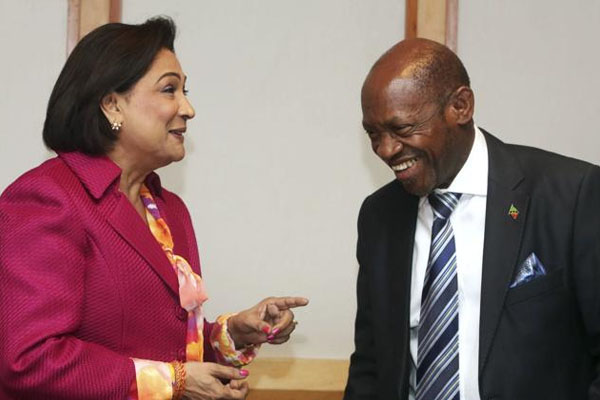 Basseterre, St. Kitts (CUOPM) — The relationship between CARICOM and Japan has been taken to a higher level as a result of the first CARICOM-Japan Summit, held on Monday in Trinidad and Tobago.

The two sides highlighted their respective interests in the discussions, concentrating on three areas, namely, vulnerabilities of CARICOM countries and necessary cooperation for their sustainable growth; strengthening exchanges and bonds of friendship; and deepening cooperation in the international arena.

Immediately thereafter, Barbados’ Prime Minister Freundel Stuart spoke on behalf of CARICOM on matters related to the economy. He pointed out that the vulnerabilities of CARICOM countries were well documented, that is, their small size and the limited range of their resources; their open economies and their susceptibility to external economic and other shocks; their dependence on exports of a limited number of commodities and services, and their exposure to natural disasters.

According to the Barbados Government Information Service he also noted that public debt in the region had reached unsustainable levels, with nine of the 15 CARICOM countries having debt ratios exceeding 70 percent of GDP; and that their expenditure on fuel imports diverted budgetary resources from critical infrastructure and social programmes such as health, education, citizens’ security, and attention to the environment. He said, for example, that in the case of Barbados, expenditure on petroleum imports equalled expenditure on education.

Stuart updated Abe on CARICOM’s energy policy and efforts on renewable energy and energy efficiency, as these would help to lower the carbon intensity of the region and contribute to global efforts for the mitigation of the effects of climate change. He referred to the devastating effects of disasters on the region, mentioning the case of St Vincent, which had lost 17 per cent of its GDP following a natural disaster last December.

He outlined the serious challenge to the region through lack of access to development financing, in particular, concessional financing from international financial institutions, as reflected in the fact that all CARICOM Member States, except Haiti, have been “graduated” from a low income status by the World Bank. This threatened job creation, sustainability of poverty reduction measures and progress towards the achievement of MDGs.

Prime Minister Stuart, however, pointed to the steps that CARICOM was taking to address the debt burden and to create economic growth, namely through the following:

1. The Commission on the Economy set up to address the economic challenges confronting Member States, focusing on fiscal and debt management, resource mobilisation and employment;

2. The Transportation Commission set up to address transportation links and the movement of goods and people across the region;

3. The Human Resource Development Commission set up to ensure the skills base of our economies is supportive of our growth and development thrust;

4. A Regional Digital Development Strategy with the centre piece of a Single ICT Space in the region; and

5. The recent adoption of a five-year Community Strategic Plan to promote the sustainable growth and development of the Community, focusing, inter alia, on achieving economic, social, and technological resilience.

On behalf of the region, Stuart sought the assistance of the Japanese Prime Minister in helping the region to articulate in international fora the critical needs set out in its international recovery plan, in relation to:

In the bilateral meeting between the Prime Ministers of Barbados and Japan, held shortly after the regional engagement with Japan, Stuart said his country valued highly its 47-year-old diplomatic relationship with Japan, and pledged to continue to deepen and strengthen it. He thanked Japan for the welcomed grant assistance through the donation of photovoltaic equipment to several primary schools in Barbados.

In addition, he took the opportunity to set out important issues for Barbados, such as the need for the review of the criteria for graduation currently based on per capita GDP, and Barbados’ continued interest in negotiating a Double Taxation Agreement with Japan.

Abe recognised Barbados’ leading and important role in Small Island Developing States matters, and acknowledged the need to consider vulnerabilities in dealing with their access to international financing. He also stated that he would like to cooperate more with Barbados in the international arena, and that the two countries would continue their discussions regarding a Double Taxation Agreement at the diplomatic level.