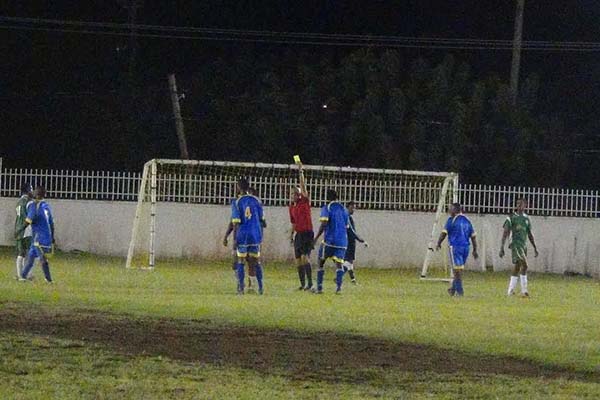 The Brand SLYBO Stoney Grove Strikers have the unenviable task of defeating the Beyond Homes All stars team by 13 clear goals when the two teams meet this coming Saturday and still hope for Highlights to defeat CCC Bath United when those two teams meet in order for them to make it into the finals.

CCC Bath United on the other hand, only have to avoid losing to Highlights in order to make into the finals.

The SL Horsfords Highlights team, maintained their unbeaten run on Tuesday night—4th February when they edged out the determined Stoney Grove team by a score line of 1 goal to nil and assured themselves a spot in the grand finals.

In the first match of the evening, a depleted All stars team, took a pounding at the hands of the CCC Bath United team who swamped them 12 goals to nil in a totally one sided affair.

One All Stars player was shown red in the early exchanges and Gerard TRINI Charles apparently in protest also exited the field.  The All stars team was then reduced to a mere 8 players and certainly no match for the fleet footed Bath men.

Despite the best efforts of Curtis Morton Jr and his defense team, Oneil DADDY SHAKES Walters was clueless in goal and the Bath men just kept counting.

Here is a summary of the matches played on Tuesday night:

This coming Saturday—8th February is going to be a big night at the ET Willet Park as two SKNFA fixtures will be played.

Game one will feature one First Division Game with our very own CCC Bath United coming up against Spurs from St. Kitts and then game two will be a Premier League fixture with St. Pauls coming up against Village. First game kicks off at 5 PM

There is also the welcome treat of the Grand Masters also coming to the Park to spice things up.

Then on Sunday-9th February, the Final Four continues with SSG Strikers coming up against Beyond Homes Allstars at 6PM and then a big one with CCC Bath United locking horns with SL Horsfords Highlights at 8PM

The general public is urged not to miss even one of the upcoming week end games.