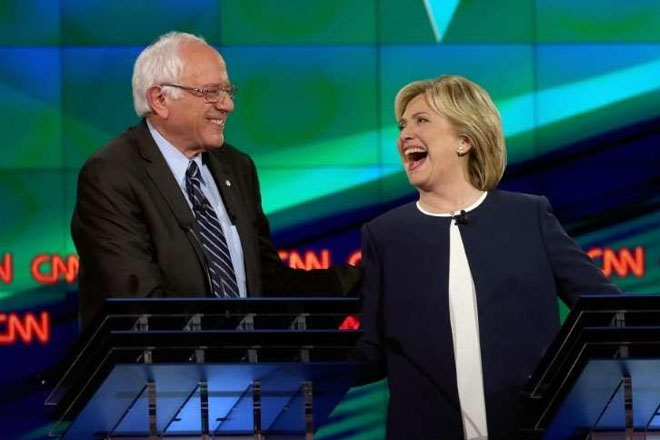 Hillary Clinton just had the best 10 days of her campaign

(The Washington Post) – Hillary Clinton has struggled as a candidate — to put it kindly — since she formally entered the presidential race in the spring. She’s been guarded, wooden and slow to adapt to changing circumstances. Her allies insisted that she could — and would — be a good candidate. Yet, every time Clinton had a chance to shine she, well, didn’t.

That changed last Tuesday in Las Vegas when Clinton outclassed the four men on stage with her in the first Democratic presidential debate. She was affable, knowledgeable and presidential. She looked bigger — and better — than everyone else around her.

Clinton’s strength in that debate helped drive two of her marginal opponents — Jim Webb and Lincoln Chafee — out of the race. Chafee said as much when he dropped out Friday morning.

Her performance also launched a narrative that Vice President Biden might well have missed his window of opportunity for getting into the race. Clinton no longer looked like a deeply wounded candidate, ripe for the picking by Biden. Polling in the wake of the debate began to turn; she widened leads over Bernie Sanders and Biden in Iowa and moved into a statistical tie with Sanders in New Hampshire. Suddenly, Clinton had momentum — something she had failed to find repeatedly in the first six months of her campaign.

Then came Biden’s announcement on Wednesday that, indeed, he had missed his window and would not seek the presidency. While Biden’s decision had an obvious practical effect — in polling he tended to pull more from Clinton than Sanders — there was also symbolic weight to it. Biden had looked at the numbers and the calendar, talked to lots and lots of Democrats and concluded that he, the sitting vice president of the United States, couldn’t run a campaign that could beat Clinton.

Without Biden, the race effectively turns into a one-on-one contest between Clinton and Sanders. Webb and Chafee are out; Martin O’Malley may well follow them soon if he can’t bump his Iowa numbers up. And, in a one-on-one race, it’s almost impossible to see how Sanders beats Clinton unless he peels away significant black and Latino support from her. He’s yet to demonstrate any ability to do that.

A day after Biden bowed out, Clinton faced down the House Select Committee on Benghazi, a made-for-TV standoff that many had been awaiting for more than two years. (Clinton was last on Capitol Hill to testify about Benghazi and her role in it as secretary of state in January 2013.)

For Republicans, the hearing amounted to the political equivalent of Al Capone’s vault — lots of expectation, little result. Clinton, clearly chastened by the negative publicity her famous/infamous “what difference does it make?” outburst drew the last time she testified, was calm, cool and collected. She pushed back effectively when it was warranted but never lost her temper. She movingly told the story of the day of the attacks in Benghazi and of how it impacted her — recounting the “sleepless nights” she had spent in the wake of the deaths of the four Americans killed in September 2012.

“I don’t know that she testified any differently than previous times she testified,” Rep. Trey Gowdy (R-S.C.), chairman of the Benghazi committee, acknowledged at the end of the hearing. So, yeah.

What we learned (or relearned) about Clinton over the past 10 days is that in certain formats, she can be outstanding. Those formats tend to be ones governed by a very specific set of rules (debates, congressional hearings) in which preparation pays off and the amount of freelancing required is minimal.

It remains to be seen whether Clinton can get better at things like rallying big crowds to her side with a display of genuine passion. (She’ll get a chance to flex that muscle Saturday night when she speaks at the Jefferson-Jackson dinner in Des Moines — the event that effectively launched then-Sen. Barack Obama’s campaign eight years ago.)

But, over the last 10 days, Clinton proved (or re-proved) that she can perform under the brightest of lights and can even get a break or two (like Biden not running). For a candidate who has struggled as much as Clinton has, that’s a gigantic win.