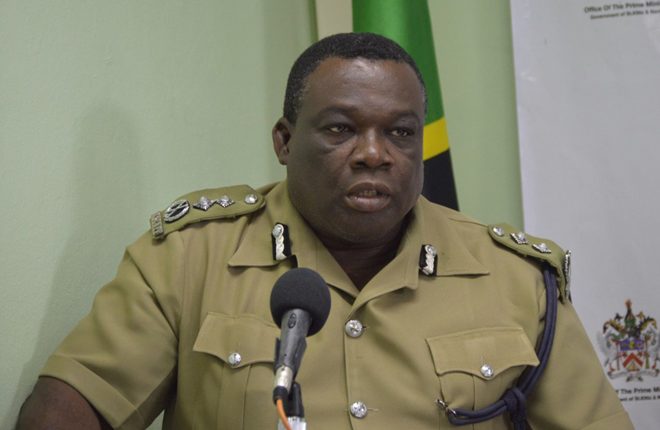 Hilroy Brandy Invested With Full Powers of Commissioner of Police in St. Kitts and Nevis

Basseterre, St. Kitts, October 04, 2018 (SKNIS): Prime Minister of St. Kitts and Nevis, Dr. the Honourable Timothy Harris, announced that Hilroy Brandy, Deputy Commissioner of the Royal St. Christopher and Nevis Police Force (RSCNPF) has been invested with the full powers of the Commissioner of Police on a temporary basis to ensure that public safety operations can continue seamlessly.

Mr. Brandy’s appointment became effective on October 01, in the absence of Commissioner of Police, Ian Queeley, who is currently on vacation. Prime Minister Harris said that the absence of the Commissioner is part of a broader programme that is being implemented across the police force.

“We have put basically the High Command and the force really, on a programme of drawing down on accumulated leaves which is very substantial,” said Dr. Harris, who is also the minister responsible for national security. “… others of the High Command from time to time have and will continue to proceed [on leave] in an orderly fashion to draw down on extensive and accumulated leave.”

Other members of the rank and file with accumulated vacation days will be included in the programme as it extends over the coming weeks and months ahead.

As law enforcement continues to carry out the work of protecting and serving the public, Mr. Brandy will oversee the ongoing execution of a re-strategized operational plan that was announced mid-September by police. While much of the details are withheld for security reasons, the public can expect to see increased members of the security forces on patrol and executing Vehicle Checkpoints (VCPs).

“Mr. Brandy will have the fullest support of the rest of the police, the government and the country,” Prime Minister Harris said.

A clear message was also sent by the minister of national security to criminal elements that seek to disturb social peace and stability.

“The criminals, wherever they are, wherever they are from, must never doubt our resolve to find them and to bring them to justice. I call on all of us to comply with the laws of the land,” Dr. Harris stated. “Those who commit criminal offenses must never be sheltered in our homes, in our schools, in our churches, nor by political parties. There must be no resting place for these criminals.”