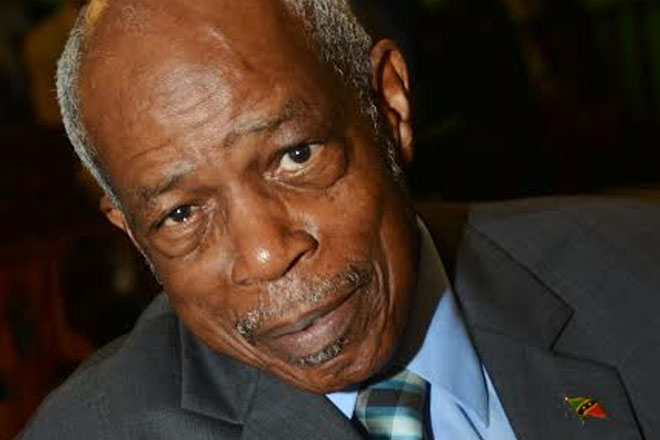 Dr. the Rt. Honourable Sir Kennedy Simmonds, our first Prime Minister, first attained the title of Sir in 2004 when Queen Elizabeth II appointed him as Knight Commander (K.C.M.G.) in the Most Distinguished Order of St. Michael and St. George. Founded in 1818, “the Order of St. Michael and St. George is awarded to men and women of high office who render extraordinary or important non-military service in a foreign country or for important or loyal service in relation to foreign and commonwealth affairs,” according to www.gov.uk.

The National Honours Act, Act 19 of 1996, was put into force on September 16th, 1996, thereby establishing The Order of Honour, Decorations and Medals. Under the Act, the Order of National Hero may be awarded to any citizen of Saint Christopher and Nevis who has rendered distinguished and outstanding service to the Nation.

Tomorrow morning, His Excellency the Governor-General also will confer formally the O.B.E. on Ms. Clarita Richards, for her contributions to education, music and public administration, and the M.B.E. on Mr. Keith Ian Scarborough, for his contributions to our cultural development.

Introduced by King George V on June 4th, 1917, awards under the Order of the British Empire were first presented by the King during a special investiture held at Buckingham Palace on September 27th, 1917.

In descending order, the rank of Officer (O.B.E.) is awarded to a recipient “for having a major local role in any activity, including people whose work has made them known nationally in their chosen area,” and the rank of Member (M.B.E.) is awarded to a recipient “for a significant achievement or outstanding service to the community. An M.B.E. is also awarded for local ‘hands-on’ service which stands out as an example to other people,” according to www. gov.uk.

The ceremony will be carried live on ZIZ Radio and Television from 10:00 am tomorrow, Tuesday, June 28th. To see the ceremony streamed live, please go to www.zizonline.com and click on “ZIZ TV” then “Channel 5,” or simply click the “Watch NOW!” icon at the top of the main page.