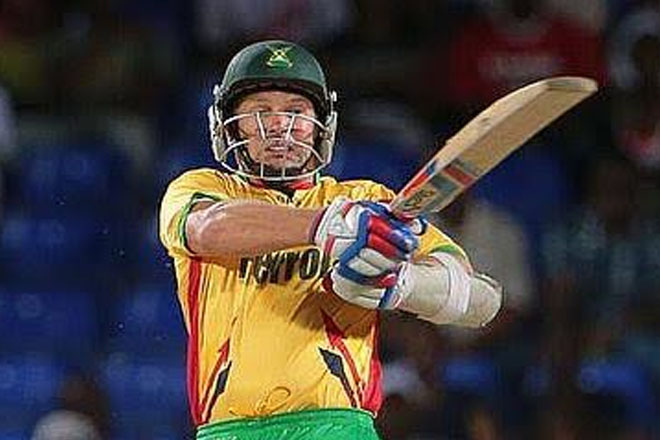 Sports Page — Brad Hodge’s 61 in a 36-ball assault gave Guyana Amazon Warriors an easy 23-run win against St Kitts and Nevis Patriots in Basseterre. Rain brought a premature end to the match in the 17th over of the chase, by which time Amazon Warriors were comfortably ahead of the D/L target.

Patriots lost their openers within the first four overs after choosing to bat, but were resurrected by Marlon Samuels’ 40-ball 61 – the only score above 20 in the innings. Samuels and Tonito Willett added 54 for the third wicket before Willett holed out at long-off in the 13th over off Marchant de Lange. Samuels then took 16 runs off the remaining four balls of the over, which set a strong platform for the last few overs. Patriots finished well to end with 158 for 6 – 51 coming in the last five overs.

In the chase, Amazon Warriors lost Trevon Griffith in the second over for 6. However, Denesh Ramdin counter-attacked with 31 in 15 balls, which included two sixes and three fours, before he was caught behind in the seventh over. Hodge took the attack to Patriots from the outset, while Assad Fudadin, who was playing his second match of the season, dropped anchor with a run-a-ball 43. Patriots couldn’t stop the run-flow as boundaries were hit regularly. An unbeaten 98-run third-wicket stand took Amazon Warriors to 146 for 2 in the 17th over, when the D/L par score was 123.