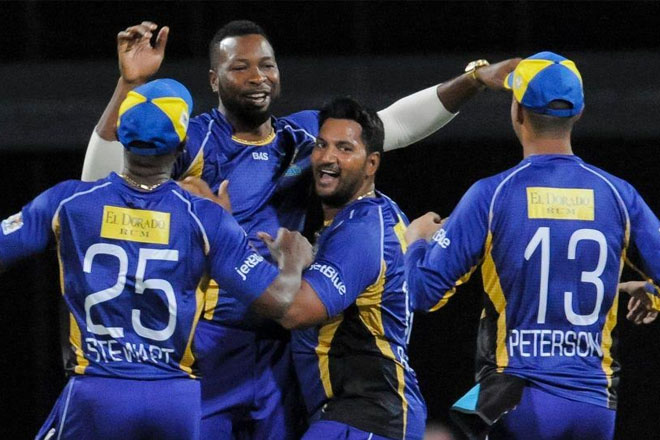 Jason Holder claimed figures of 3 for 11 in four overs, including a double-wicket maiden, to set up Barbados Tridents’ third win in a row. The support cast was also impressive as Trinidad & Tobago Red Steel were kept to 95 for 9. Dwayne Smith and Dilshan Munaweera then launched the chase with a flurry of boundaries as Tridents sealed the win in 13.1 overs with eight wickets to spare.

After having opted to bat, Red Steel’s top order was blown away by Holder and Ravi Rampaul. Cameron Delport perished for a two-ball duck before Jacques Kallis pulled a short one straight to long leg. From 2 for 2, Red Steel stumbled to 4 for 3 next over; Holder striking twice in two balls to remove Kamran Akmal and Darren Bravo. The other Bravo, Dwayne, however, offered semblance of a fight through 30 off 28 balls, adding 46 for the sixth wicket with Jason Mohammaed.

However, Bravo’s wicket triggered another collapse as they went from 66 for 5 to 93 for 9. While Holder was the best bowler for the hosts, Rampaul, Robin Peterson, Kieron Pollard and Jeevan Mendis pitched in with a wicket each, before ceding the stage to Smith and Munaweera.