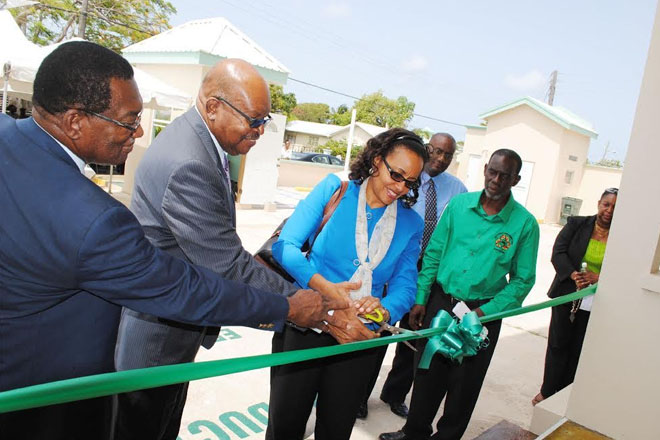 Basseterre, St. Kitts — Federal Minister with responsibility for Solid Waste Management Corporation – SWMC (St. Kitts) the Hon Eugene Hamilton has praised its management’s prudence in terms of acquiring, through self-financing, real estate that now has an estimated value of $5 million.

“The ability to move from landless existence, with annual rental expenses in excess of $60,000 per annum, to one which is a fixed asset of a corporation that is now broadened significantly by the investment of over $4 million, that is indeed a commendable fact and feat,” said Hon Hamilton.

“In fact I am advised that the market value of this new edifice is estimated in excess of $5 million. Moreover, for a property that was acquired for $290,000 through self-financing, the return on investment is indeed promising.”

Hon Hamilton who is the Minister of Agriculture, Health, National Health Insurance, Human Settlement, Community Development, Gender Affairs, Social Services, Cooperatives and Lands, made the remarks Thursday July 2, at a ceremony held to open the new corporate headquarters of the Solid Waste Management Corporation at Taylor’s Range in Basseterre.

The colourful ceremony, which was held under the distinguished patronage of the Acting Governor General, His Excellency Tapley Seaton, CVO, QC, JP, was attended by a cross-section of invited guests who included Federal Minister the Hon Ian Patches Liburd, Attorney General Hon Vincent Byron, Minister of State for Health, the Hon Wendy Phipps, and Advisor in the Ministry of Health Mrs Eugenia Condor.

“Ladies and gentlemen what you have come to join us in celebrating today is the culmination of an endeavour that began several years ago, when the board of directors and staff of the Solid Waste Management Corporation first yearned to have a home of their own,” said Hon Hamilton.

“The corporation’s longing to acquire its own premises was the starting of a short journey. It was borne out of the desire to build a lasting legacy for the people of our Federation in so far as the corporation commitments to the health and safety of our environment are concerned.”

The Minister admonished the staff of Solid Waste Management Corporation to continue in their maintenance of high standards in so far as the collection of the disposal waste is concerned, and the general cleanliness of the island of St. Kitts.

“I also use this platform to express to our people, all of our people, the need to cooperate with the corporation and its workers as they endeavour to keep our surroundings clean, safe and healthy via efficient systems of garbage collection, garbage management, and garbage disposal.”

Visitors were taken on a guided tour of the new building by fifteen-year-old Miss Zaida McCall, a granddaughter of the corporation’s Operations Supervisor, Mr Wilmon McCall. On reaching the upper level of the building, they witnessed the launch of the corporation’s website, which was carried out by its designer, Mr John James, an IT Consultant of Kittitian descent from Canada.