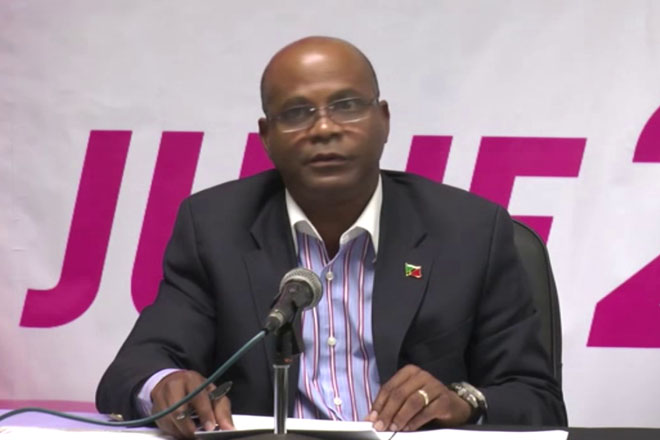 (ZIZ News) – Thursday’s St. Kitts Music Festival press conference served three purposes: it launched the 19th edition of the festival, introduced Hon. Lindsay Grant as the new minister who will oversee its operation and revealed this year’s line-up to date.

The new Tourism Minister, who had been involved in the festival several years ago, said he is pleased to be associated once again.

Minister Grant described the festival as a magnet in the tourism industry, noting that it attracts visitors during the slow tourist season.

“Our goal going forward is to continue to set higher standards of excellence and attract even larger followings to this celebrated and exuberant festival,” the minister said.

“A serious analysis of the St. Kitts Music Festival, from a rationalist point of view, suggests that it has the potential to increase the length of stay over visitors, increase visitor expenditure, improve destination awareness and increase civic pride and community solidarity,” he continued.

He added that it is an impressive and expressive way to celebrate Kittitian and Nevisian heritage, culture and tradition.

“You will agree that the St. Kitts Music Festival is not only about music, party and atmosphere but it is an island wide phenomenon that energises our people to support a worthwhile initiative that over time has earned a reputation among music lovers around the world for its diversity of music and exhilarating performances,” Minister Grant stated.

Although the entire line up has not yet been finalised, ZIZ News understands that the government and the private sector are supporting the festival in a big way.