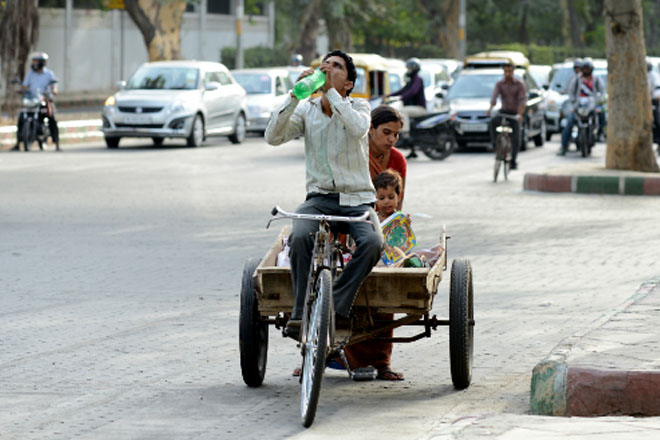 New Delhi, India (AFP) — Hospitals in India battled Thursday to treat victims of a blistering heatwave that has claimed nearly 1,500 lives in just over a week — the highest number recorded in two decades.

Hundreds of mainly poor people die at the height of summer every year in India, but this year’s figures are already the highest since 1995, when official data shows 1,677 people succumbed to the heat.

In southern Andhra Pradesh, by far the worst-hit state where top temperatures have reached 47 degrees Celsius (117 degrees Fahrenheit) and 1,020 people have died since May 18, doctors said they had never seen so many severe cases.

“I have worked as a medical officer in this district for 40 years and I have never seen anything like this, with so many people arriving already dead.”

Subbarao said most of the worst affected were poor and elderly who were simply unaware of the dangers of heat stroke, which can be fatal if left untreated.

Another 340 people have died from the heatwave in neighbouring Telangana state, where temperatures hit 48 degrees Celsius over the weekend, compared to 31 such deaths in the whole of last year.

The Centre for Science and Environment, a New Delhi research group, said the high number of deaths could be due to the sudden onset of the heat this year.

“This could be due to the sudden change in temperatures after a prolonged wet February and March that had kept the temperatures cool,” said Arjuna Srinidhi, the group’s programme manager for climate change.

Hospitals in Delhi, where top temperatures have soared to 45 degrees Celsius, were struggling to cope with the fall-out.

“Patients are complaining of severe headache and dizziness. They are also showing symptoms of delirium,” he added, describing a common symptom of severe dehydration.

The surge in demand for electricity from air conditioners led to power cuts in parts of Delhi, exacerbating the misery for residents of the capital.

Large queues formed outside the All India Institute of Medical Sciences, one of Delhi’s largest government-run hospitals, where women clutched plastic water bottles and packets of mango juice.

Others tried to console crying babies, their heads wrapped in handkerchiefs against the blistering sun.

“Last night there was no electricity for nearly five hours,” 31-year-old housewife Seema Sharma told AFP outside the hospital as she waited in line for her four-year-old son to be seen.

“You can imagine what we must have gone through. He just couldn’t sleep and kept on crying. Now he has fever as well,” she said.

Unconfirmed reports said two people had died in Delhi, where tens of thousands sleep on the streets with little protection from the heat.

State authorities have ordered that air coolers be installed in shelters for homeless people, which are often windowless tin shacks.

Forecasters said there was little hope of any immediate respite from the temperatures in northern India, which have been aggravated by hot, dry winds.

“We think that these heatwave conditions will take another four to five days to subside,” said Brahma Prakash Yadav, director of the Indian Meteorological Department.

India declares a heatwave when the maximum temperature hits 45 degrees Celsius, or five degrees higher than the average for the area in previous years.

The Press Trust of India news agency reported 43 deaths from the heatwave in the eastern state of Orissa, and another 13 succumbed in neighbouring West Bengal.

Two people died in western Maharashtra state, where authorities said they did not expect conditions to improve until the arrival of monsoon rains in June.

The monsoon is forecast to hit the southern state of Kerala on May 30 before sweeping across the country, but it will be weeks before the cooling rains reach India’s arid plains.