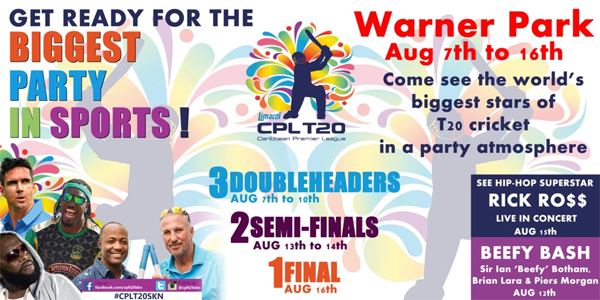 Basseterre, St. Kitts (SKNIS) — Hundreds of tickets have already been sold for the St. Kitts leg of the Limacol Caribbean Premier League (CPL) T20 which will see a total of ten matches at the Warner Park Cricket Stadium.

Matches begin on August 07 with a doubleheader featuring the Guyana Amazon Warriors versus the Antigua Hawksbill in the first game followed by the Trinidad and Tobago Red Steel versus Barbados Tridents. This is followed by two other doubleheaders on August 09 and 10.

Keisha Archibald, Assistant Venue Manager with the Local Organizing Committee, noted the influx of visitors expected on island for the tournament and encouraged residents to purchase their tickets now so as to not miss out on this exciting experience.

“For the doubleheaders, tickets for the western mound only cost $20 while seating in the stand is $25,” Ms. Archibald said, adding that children will pay half. “This is great value to see some of the world’s best play right here at Warner Park.”

Semifinal 1 and 2 will be held on August 13 and 14 while the finals take place on August 16. The admission is slightly higher for these matches. Tickets for the All-Star ‘Beefy Bash’ Charity Match are expected to go on sale by next week.

Tickets can be purchased from the Warner Park Ticket Office at East Park Range and at Digicel and Courts Ltd. offices in St. Kitts and in Nevis. They are also available online at www.kyazoonga.com/cricket/cplt20.