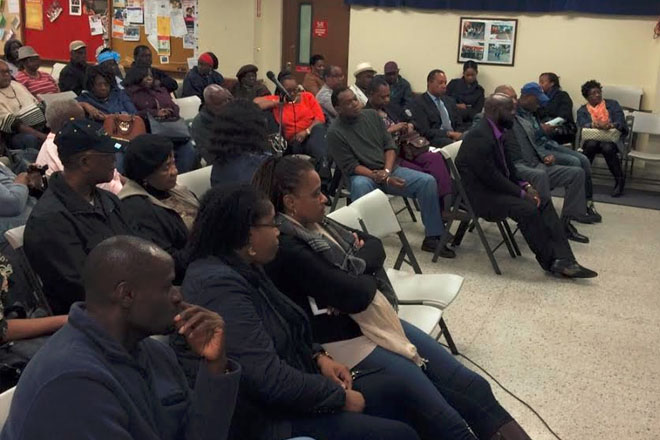 Basseterre, St. Kitts (SKNIS) — Prime Minister of St. Kitts and Nevis, Dr. the Honourable Timothy Harris and Minister of Foreign Affairs, the Honourable Mark Brantley, wrapped up their busy and productive schedules by addressing over 300 nationals at a packed town-hall meeting at St. Luke’s Episcopal Church in the Bronx, New York, on October 3rd.

In his address, Prime Minister Harris thanked the diasporic community (of whom Edrice Lewis, designer of the national flag was a part) for supporting the change to bring about the Team Unity Government. Dr. Harris pledged his Government’s continued support for all nationals of St. Kitts and Nevis living in the United States of America.

“It was prayer that brought about this change,” Prime Minister Harris said, adding that never in his political career was he met and told by so many persons, young and old, that they were praying for him and the efforts of Team Unity.

“On 16th February, the praying people went to the polls and voted for a change,” said Dr. Harris.

In outlining some of the achievements of the seven month old Team Unity Administration, Prime Minister Harris said that his administration has already provided budgetary support for the Nevis Island Administration (NIA) in the tune of EC$10 million and brought about an end to the shift system at the Basseterre High School (BHS).

“The former administration ignored the situation at the Basseterre High School to the detriment of the teachers and students who suffered for over three years,” he told the large gathering.

“Crime is down,” Prime Minister Harris said. “Regardless of what the Opposition says on social media, that is a fact.”

Prime Minister Harris made a passionate appeal for all and sundry to become involved in the moral grounding of young people, particularly males, as this can positively impact the creation of a wholesome society with its members at peace with each other.

“There has been no victimization” the Hon. Prime Minister told the hundreds of nationals in attendance. He made reference to the fact that practically all the permanent secretaries appointed under the former Labour Administration are still working.

“Nobody is victimizing them” he emphasized.

In commenting on the removal of the Value Added Tax, the Prime Minister said that this has had a positive impact on the lives of hundreds of persons who can now afford to buy and eat more healthy foods. He also said that in time of bereavement the people of St. Kitts and Nevis were called upon by the former Labour Administration to incur cost by imposing VAT on funeral expenses.

“My government has removed that,” he said.

Minister of Foreign Affairs, Hon. Mark Brantley, also thanked nationals in the diaspora for their support and said that they should see themselves as part of the development of the Federation.

The Minister of Foreign Affairs said that the Federal Government is doing the best with the situation that it inherited and that nationals will appreciate that new initiative will take time.

The Minister praised the Government and the Prime Minister for the work done in the short period after taking office. He commented on the Sugar Workers Restoration Fund Payout and the fact that in such a short period of time the government was able to attract President Maduro of Venezuela to be a part of the payout process.

In the question and answer segment, several issues were raised including the improvement in the delivery of health care, plans of the Government to attract nationals to return home, legislation with respect to term limits for the prime minister, the poor attitude of service providers in the private and public sectors, the situation with the Sugar Workers Restoration Fund payout and the situation with debtor’s court.