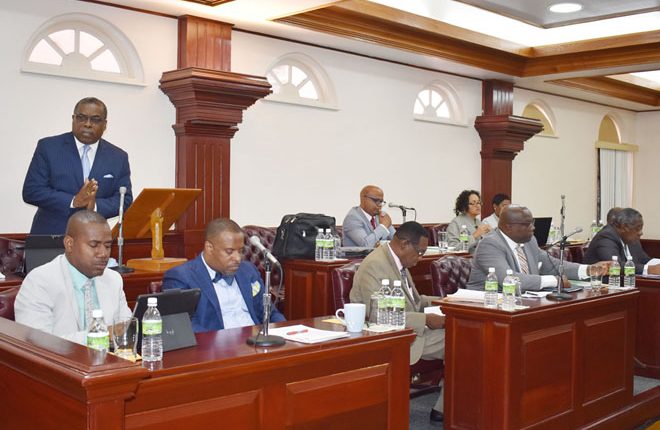 BASSETERRE, ST. KITTS, September 6, 2018 (PLP PR Media Inc.) — Minister of Public Infrastructure, Posts, Urban Development, and Transport, and Member for St. Christopher One, the Hon Ian Patches Liburd, has advised that he has never owned a gun. He has chastised the opposition St. Kitts-Nevis Labour Party for spreading malicious information, on social media, which would suggest that he is the owner of a gun.

“Mr Speaker may I for the record here and now state categorically that I – Ian Patches McDonald Liburd, the elected representative of Saint Christopher One/East Basseterre – have never owned a gun,” he said when he stood in the National Assembly on Thursday, September 6 under ‘Personal Explanations’.

House Speaker, the Hon Michael Perkins, had told the Parliament: “I recognise the Hon Ian Patches Liburd to issue a statement under ‘personal explanations’. And for the benefit of all, the Honourable Member Liburd would have sought my leave to present this personal explanation, which I am allowing.”

Thanking the Speaker, the Hon Liburd said that he stood in the August House with a heavy heart, and with a sense of profound sadness not just because his son was executed over a week ago but “because Mr Speaker my attention was drawn to an article which is posted on the St. Kitts-Nevis Labour Party Facebook Page, Mr Speaker, with the caption to wit and I quote ‘Minister Liburd’s Gun Found at Crime Scene of His Son Mikhail’,”.

The grieving parent further noted: “Mr Speaker it is sad, very sad Mr Speaker, that the political party of those on the opposition benches have used the unfortunate and tragic loss of my son Mikhail, ‘Mitch’ as his friends call him. They have used this unfortunate and tragic loss of my son to propagate falsehood, Mr Speaker, by maliciously spreading an untrue statement on social media, Mr Speaker. It is sad Mr Speaker, and their web page reads ‘For the good that we can do’.”

In conclusion, the Hon Liburd noted: “So how can we Mr Speaker – in good conscience – how can we sit with the opposition? How can we come together to fight the scourge of crime in this country Mr Speaker, when the St. Kitts-Nevis Labour Party and its leadership perpetually promotes this political tribalism – how can we?

“I must reiterate that I do not own a gun and have never owned a gun. May I, however, hereby reassure the constituents of East Basseterre who sent me here, and by extension may I reassure the entire Federation of St. Kitts and Nevis, Mr Speaker, that this insidious attempt at my personal destruction will fail.”

At the end of the Hon Liburd’s explanation, Speaker the Hon Michael Perkins further explained that under the Rules of the House Standing Orders in particular Section 22, which is headed ‘Personal Explanation’, members have that right to defend themselves in the Honourable House against accusations and/or allegations made against them which are in public domain and which they view are affecting them negatively in a personal way, noting that “it is an opportunity for them to set records right as far as the member is concerned.”