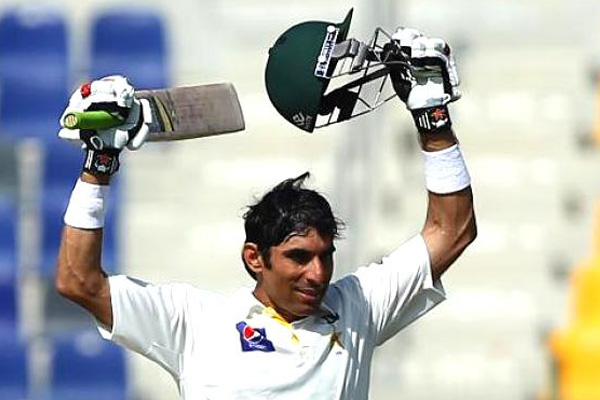 ‘I was just trying to hit every ball’ – Misbah

After equaling Sir Vivian Richards’ record for the fastest Test hundred in terms of deliveries, Pakistan captain Misbah-ul-Haq said that he had played to capitalise on the strong situation the side was in and score as many runs as possible in quick time while giving No. 3 batsman Azhar Ali a chance to score his second century of the Test.

Pakistan were leading by 461, and Azhar Ali was batting on 66, when Misbah arrived at the crease after Younis Khan’s wicket. The Pakistan captain was dropped off the second ball he faced and made Australia suffer by scoring 22 runs off a Steven Smith over and reaching his fifty off 21 balls, bettering Jacques Kallis’ record. He soon reached his hundred off 56 deliveries. Misbah and Azhar’s centuries helped Pakistan set Australia a mammoth 603-run target in Abu Dhabi and the visitors need another 460 runs with six wickets in hand going into the final day.