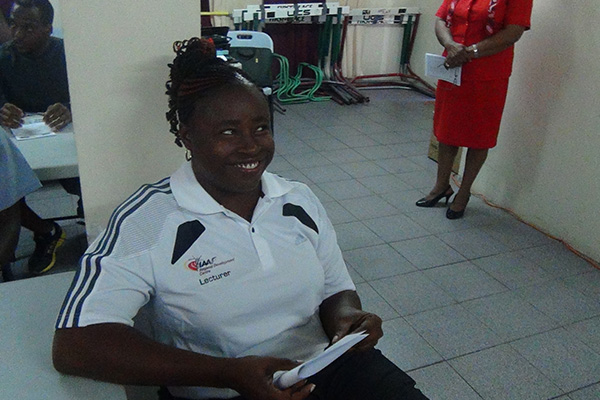 The course which is being conducted at the ET Willet Park and which has attracted over 25 coaches from across the island, commenced on Tuesday 3rd December.

The course involves some intense theoretical sessions in the form of lectures conducted by Mr. Craig Connor, IAAF lecturer-and Ms Johnson herself.  Practical sessions are also an integral part of the day’s activities.

One of the highlights of the sessions so far was a practical session held on Wednesday 4th December, which involved a selected group of children from Primary schools across the island.

Mr. Connor pointed out that the coaches had to plan a practical session with the children based on what they had learnt during the lecture sessions. It was referred to as a Kids’ athletics session.

They formed the children into various groups with the coaches being divided to manage each group and coordinated several activities which included  formula one; cross hopping, rotational throws and endurance runs.

All the while, they were being closely observed and assessed by their two lecturers who used the sessions to advise the young coaches of their strengths and weaknesses in terms of their continued growth and development.

On Thursday 5th December, one of the lecture sessions conducted by Ms Johnson focused on GROWTH AND DEVELOPMENT and  dealt with coaching techniques required for the various stages of growth of the children as they move from Primary school age into puberty.

The session was very lively and interactive.

Ms Johnson who is a Teacher by profession observed that the participants are eager to learn and very positive.

The course will conclude next week with theoretical and practical exams for the participants.