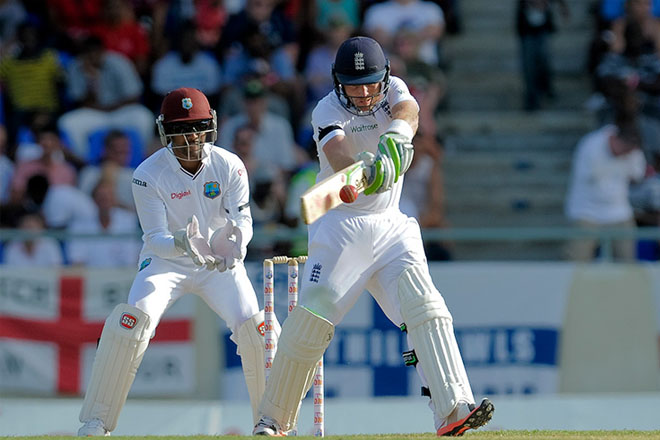 North Sound, Antigua CMC — Ian Bell’s 22nd Test hundred took the sting out of West Indies’ attack and lifted England from a position of danger to one of dominance, on the opening day of the first Test here Monday.

With his side floundering at 34 for three in the second hour of the morning, the 33-year-old right-hander came to the rescue with a classy 143 that helped propel the visitors to 341 for five at the close at the Vivian Richards Cricket Stadium.

Bell anchored two partnerships which blunted a West Indies seam attack that showed immense promise in the morning session, after Denesh Ramdin won the toss and opted to bowl first.

He added 177 for the fourth wicket with Joe Root who scored 83, and then put on a further 130 for the fifth wicket with Ben Stokes who was unbeaten on 71 at the close.

With 150 beckoning, Bell’s innings was ended just minutes before the close by a peach of a delivery from seamer Kemar Roach, which the batsman nicked behind to Ramdin.

All told, Bell batted five hours and 37 minutes, faced 256 deliveries and cracked 20 fours and a six – a straight hit off part-time off-spinner Marlon Samuels in the final session that yielded 174 runs.

Bell’s wicket was of two on the day for the resurgent Roach who finished with two for 66 while his new-ball partner Jerome Taylor claimed two for 79.

West Indies had started the day brightly when Taylor claimed Jonathan Trott with the fifth ball of the day, caught at first slip by Darren Bravo without scoring, with a single run on the board.

The right-handed Trott, playing his first Test in nearly two years, sparred at one that shaped away and Bravo completed a regulation low catch.

England then struggled for runs as Taylor and Roach kept things tight. They had crawled to 22 without further loss when captain Alistair Cook pushed uncertainly at a full length delivery and dragged on to Roach for 11.

England’s struggles continued in the fourth over after the water break when lanky seamer Jason Holder got Gary Ballance to stab at wide full length delivery only for Bravo to snap up a chest high catch at first slip.

Bell and Root saw England safely to the lunch interval at 49 for three and then ensured West Indies went wicket-less in the post-lunch session, with positive batting.

Root took two boundaries from the fifth over after the break bowled by left-arm spinner Sulieman Benn and Bell joined him soon afterward with a pair of fours off a Taylor over.

Bell raised his half-century with a pull or four off Benn and celebrated by whipping Roach through mid-wicket for his tenth boundary.

The 24-year-old Root, meanwhile, moved to his eighth half-century in style, slashing Holder to the point boundary and then stroking him through mid-on for another four.

Root enjoyed a huge slice of luck on 63 when he was put down by Benn at gully off Samuels, in the first over after tea taken with England on 167 for three.

He failed to capitalise on his good fortune, however, and eventually perished in tame fashion in the tenth over after tea, playing on to an innocuous delivery from Taylor.

Root faced 133 balls in just over three hours at the crease and counted 11 fours.

Bell reached his century with a streaky stroke, 45 minutes before the scheduled closed when he edged Samuels past Devon Smith who moved to his right as the ball flew to his left at first slip.

It was Stokes, though, who raised the tempo in the final session, playing with gay abandon in his 80-ball stay to count ten fours and a six – a heave over long on off Benn’s 24th over which cost 12 runs.

He gathered two more boundaries from Taylor’s 14th over before reaching his second half-century in Tests, off just 59 balls. In the next over from Taylor, he smashed three consecutive fours – the first through point, the second a pull over square leg and the third a drive down the ground.

Not to be left out, Bell belted a couple of boundaries off the following over from Holder, as the discipline West Indies had earlier displayed, quickly disappeared.

Operating with the second new ball, Roach got the breakthrough the Windies so badly desired, when he got one to angle in and seam away, and take the outside edge of Bell’s bat, in the penultimate over of the day.

J Tredwell not out 0