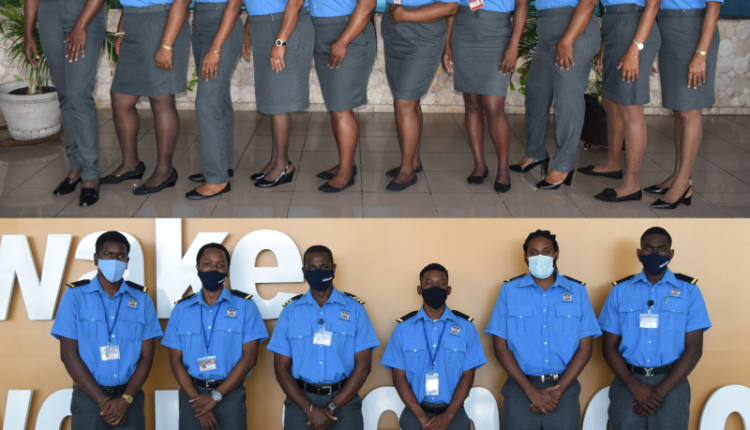 Basseterre, St. Kitts, February 11, 2021 (SKNIS): The Immigration Department completed its introduction of new uniforms across the Federation this week as part of efforts to mould its identity as an independent institution. Immigration Officers in St. Kitts and Nevis turned out to work smartly dressed donning the new blue button-down tops and dark grey bottoms, with shoulder straps that display one, two, or three bars depending on the Officer’s rank.

The Immigration Department previously fell under The Royal St. Christopher and Nevis Police Force. It was made a separate entity in July 2018 with former Assistant Commissioner of Police, Merclyn Hughes, at the helm as the first-ever Chief Immigration Officer. Since that time, under her leadership, steps have been taken to shape the image of the Department. A logo was created and social media platforms, in addition to a webpage, are being developed. The new uniforms are the latest step towards achieving this goal.

Ms. Hughes registered how pleased she was to see the Immigration Officers sporting the new uniforms.

“I think this uniform makes us look more like the law-enforcing body that we are. With Officers posted around the Federation at ports of entry, they help to create the first impression visitors get of the country, so it is important that they look the part, in addition to being professional on the job,” Ms. Hughes said. “We have immigration officers at the RLB International Airport, then we have at the private jet facility, that is, the Kayan Jet section, we have Officers at the Port Zante Marina, Marina Telca at New Guinea, and Christophe Harbour on the Peninsular. Then in Nevis, there are Officers at the Vance W. Amory International Airport, as well as the Long Point and Charlestown Piers. We also want to be a body that nationals can take pride in because of the way we present ourselves.”

Deputy Immigration Officer, Jacqueline Browne, was assigned to the Department for several years prior to its separation. Formerly an inspector of Police, she is excited about the changes being made.

“The new uniform was made by Sun Island Clothes and it has really been a long time in the making. Because of the COVID-19 pandemic, the launch was pushed back, but we are finally here, and we are very pleased with the results. I think with the new look, the team feels re-energized, reinvigorated, and motivated to carry out our mission to provide an efficient and professional service to all arriving and departing our ports, to prevent illegal entry of persons, and to liaise with local, regional and international agencies, and to be seen to be discharging the function in a courteous and friendly manner,” Ms. Browne added.

The Officers gave the new uniforms their nod of approval and disclosed that they were thrilled with the direction of the Department.