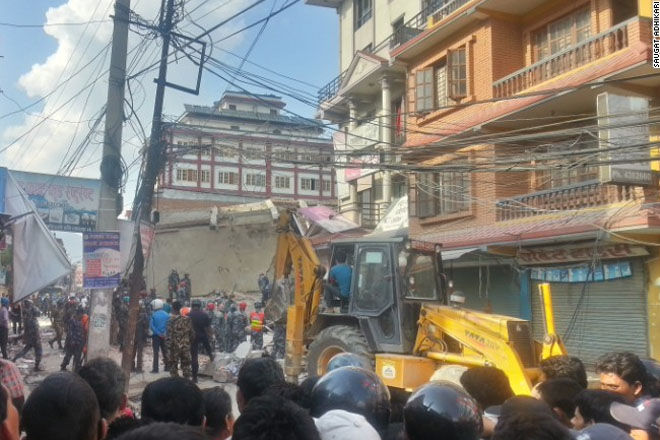 But it soon became clear that this was no mere aftershock, scary though those have been.

This was another major earthquake, the kind where you run for your life, where you seek any open area so nothing falls on your head and you don’t get trapped under the rubble.

It was then, near the epicenter of Tuesday’s quake, that the world’s most dangerous airport became a place of safe haven.

In search of any open area

People in Lukla — a town that serves as a gateway to the Everest region and that was near the epicenter of Tuesday’s quake — rushed to the airport.

Most of Lukla’s buildings are perched on hilly grounds.

The airport is said to be highly dangerous because its runway is short, and it’s surrounded by mountains. But on Tuesday, Chungba Sherpa was glad to be there.

“People are here because there is open space,” he said by telephone. “They are very scared.”

Not for the first time. On April 25 — just two weeks and three days ago — Nepal was devastated by a 7.8 magnitude earthquake. More than 8,000 people were killed and nearly 18,000 were injured.

A frightening series of aftershocks has kept residents of Nepal on edge. But none had nearly the power of Tuesday’s magnitude-7.3 quake, which was centered near Mount Everest.

It was felt with force 52 miles (83 kilometers) to the east, in the country’s capital, Kathmandu, which suffered so much in the April earthquake.

Mingma Sherpa was in his car with two friends in Thamel, Kathmandu’s congested tourist district, when the earth began to tremble.

In his rear-view mirror he saw people running in panic. It was then that he knew it was another earthquake.

He was in a hotel parking lot, surrounded by tall buildings. The ground shook for 30 seconds.

He ordered his friends out of the car, and they ran for their lives, joining the crowd, desperately seeking an open space in a part of Kathmandu where there are few.

Eventually, when everything stopped, he was able to make it back home.

Anup Kaphle, the digital foreign editor for the Washington Post, was in the Shangri La hotel in Kathmandu when the quake hit. He saw flower pots tumbling. The stairs were shaking.

He waited a minute and then ran out.

The streets were in chaos, clogged with traffic. People were staying outside.

But, in his area, Kaphle did not see any fresh buildings down.

“I don’t think anyone will be sleeping indoors”

Orla Fagan, a spokeswoman for the U.N. Office for the Coordination of Humanitarian Affairs, was on the second floor of a building in Kathmandu when the shaking began. An earthquake alarm filled the air — high-pitched, indicating the quake was intense.

Eight people tried to shelter under a door frame, she said.

“It was very, very scary,” she said. “The quake was so powerful you couldn’t move if you wanted to.”

People were out on the streets, Fagan said by telephone, too frightened to go inside.

And the fear, now reinforced by a second major earthquake, seemed likely to persist.

“I don’t think anyone will be sleeping indoors tonight,” she said.