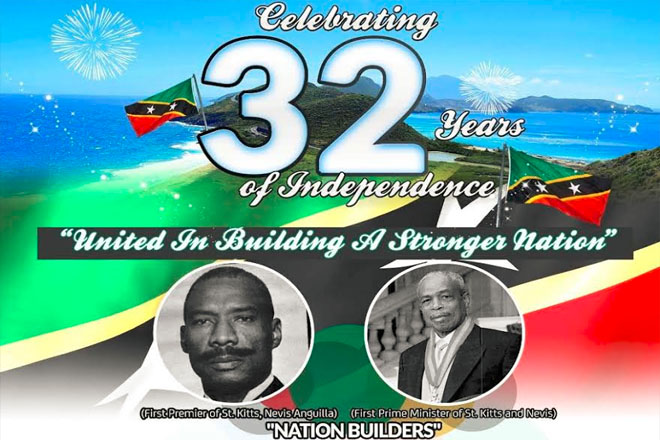 Basseterre, St. Kitts (SKNIS) — The schedule of events for this year’s celebrations marking the 32nd Anniversary of Independence for St. Kitts and Nevis under the theme “United in Building a Stronger Nation” has been released.

The chairperson for this year’s organizing committee, Minister of State, the Honourable Wendy Phipps, outlined the goals.

“The goal of this year’s programme is to promote community and national cohesion and has several events that will foster a great sense of community and national pride, one of which is a “Best Village” competition,” said Minister Phipps. “Another noticeable change this year is that the national service of thanksgiving will be held in Nevis for the first time in the history of the nation,” she added.

The Independence Celebrations Committee is comprised of representatives from various government ministries and civic organizations who have been meeting regularly to formulate the programme and the execution of the various events.

Minister Phipps highlighted that the general public will be kept abreast of the upcoming events for this year’s celebrations through, print, broadcast, and social media, and encouraged persons to follow the committee’s facebook page at https://www.facebook.com/pages/Saint-Kitts-Nevis-Independence/646317322172559?fref=ts for the most up to date information on events. She also encouraged the participation of all citizens and residents as we celebrate our Nation.

St. Kitts and Nevis became an independent nation on September 19, 1983.