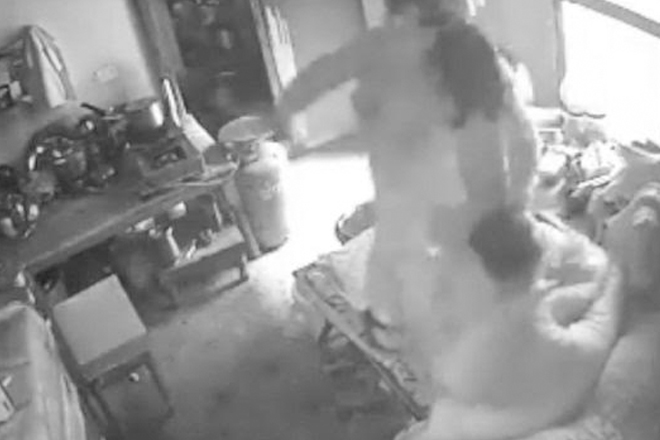 (BBC) Police in India have arrested a woman for beating her mother-in-the law after CCTV footage of the assault went viral.

Sangeeta Jain was held on Tuesday in connection with the attack on 70-year-old Raj Rani Jain in Uttar Pradesh.

The footage is apparently from last week after Ms Jain’s husband installed a CCTV camera in their house in Bijnore district to “expose” his wife.

Police said there was a “lot of infighting in the family between the husband, wife and mother-in-law”.

Sandeep Jain said his wife “used to attack” his family ever since their marriage seven years ago.

However, the motive of the attack and why it took so long for Mr Jain to report the matter to the police is not clear.

Sangeeta Jain, who has been accused of attempting to murder her mother-in-law, has not yet commented on the footage.

The graphic footage, which has sparked outrage in India, shows a woman slapping and dragging an elderly woman wrapped in a quilt in her bed. At times, it appears, she is trying to strangle the older woman.

“My daughter-in-law slapped me and tried to strangle me. Then she got some stones and hit me with them,” Raj Rani Jain, who has been admitted to hospital, told reporters.

Her son said his wife “was always like this”, but offered no other details about his wife’s behaviour.

“From what I have heard there is a lot of infighting in the family. It’s a bad state of affairs.”