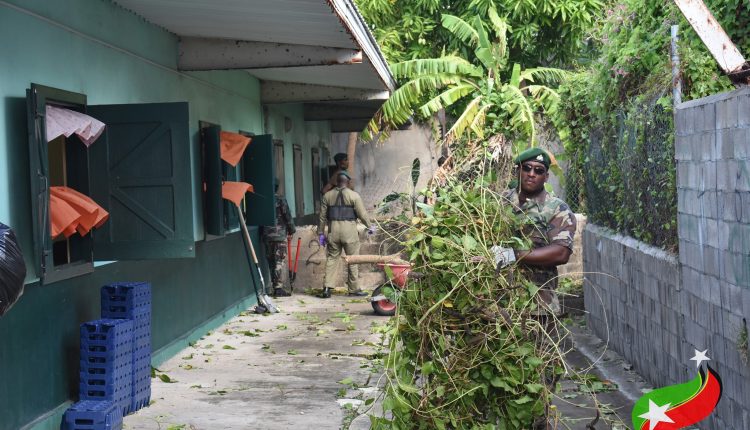 For most of the morning the soldiers were cutting overhanging branches and removing debris from the area.

The exercise was led by Warrant Officer Class 2 Laughton Huggins who gave an explanation of the work being done.

“We came out this morning at approximately 0800 hours. What we’re doing, we’re getting rid of the trees from the roofs, we’re cleaning drains. We’re gonna clean, we’re gonna sanitize. To sanitize right now is important. We’re gonna remove all debris from the compound and disposal of garbage,” he said.

He said as a past student of Irishtown Primary he felt the need to give back.

“I attended the Irishtown Primary School and with the Covid-19 ongoing, the pandemic, I thought it would be best to speak to my commander to do something for my alma mater,” he said. “In doing so I contacted my mentor, Newrish Nital, who in turn spoke with my commander, more on my behalf. The commander was gracious enough to allow this today. So in doing this I want to echo the sentiments of my commander. The Defence Force we are servants of the people and therefore what we are doing here today is simple service.”

Mr. Huggins said the cleanup isn’t intended to be a one-off event but they will continue as long as is necessary.