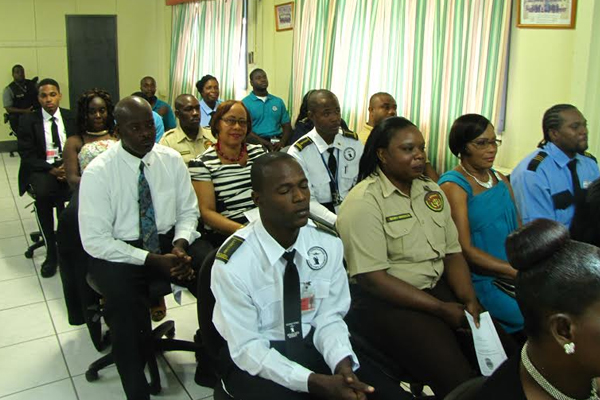 This course commenced on Monday 12th January 2015 and ended on Friday 30th January 2015. The course started with twenty-five participants. Participants were composed of four (4) participants from Ross University, six (6) from SCASPA, two (2) from Urban Development Corporation, seven (7) from People Empowerment Program and three (3) from Government Headquarters. This course was designed for three (3) weeks, and topic such as self defence tactics, mode of arrest, aspects of Island Constable Act, small charges Act, care and custody of prisoners, types of search, how to search, how to give evidence in court, use of pocket book and station diary, report writing, statement writing, disciplinary charges and penalties, to name a few. Participants were provided lessons on FATS machine which allows one to sharpen their marksmanship principles and also taken to pistol range to conduct live firing exercise. Twenty five students were successful in reaching the passing grade and two students namely Carol Hanley and Shakeema Phipps received 100% on written assignment

Mochina Carlysle from Ross University provided the student perspective. She expressed how informative the course was, how helpful, supportive and interactive the facilitators were and the sleepless nights many participants experiences with the workload that was given. She reminded her fellow classmates that their employers chose them to become Island Constables because they were seen as trustworthy, functional and possess the capabilities of becoming an Island Constable

Vernon Henry of SCASPA also expressed how delightful and rewarding the three (3) week Island Constable course was and praised the facilitators for a well structured presentation to become productive officers.

Commissioner C G Walwyn started off in his remarks with extended apologies from the Prime Minister Hon. Dr Denzil Douglas and Permanent Secretary Her Excellency, Ms Atona Browne who were unable to attend, and send their greetings and congratulations to graduates for accomplishing their task. He then thanked the family of graduates for their support, which is essential to the progress of officers. He thanked the Media Houses for their presence, and said this to them, “it is you that the general public will be aware of Island Constable programme and its purpose to assist law enforcement and everyone within the Federation”. He then commended the graduates for their great achievement in attending and passing the course and encouraged them to be great while on the streets. He reminded them that they represent The Royal St. Christopher and Nevis Police Force and have full police powers.

Certificates were presented by Commissioner C G Walwyn and Supt Moore to graduates. Also, the graduates show their gratitude to The Police Force by presenting token of appreciation to facilitators of training school for their hard work and dedication and cooks at the Training School who provided meals for the participants of this training course.