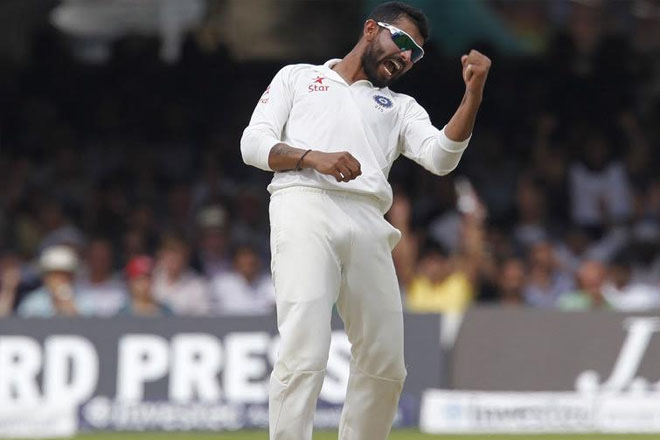 (ESPN CRICINFO) – Allrounder Ravindra Jadeja has made a comeback to the Indian squad for the first two Tests against South Africa after being dropped for the recent tours of Bangladesh and Sri Lanka. Offspinner R Ashwin, who suffered a side strain in the first ODI in Kanpur, was included in the 16-man Test squad but not picked for the last two one-day internationals.

Jadeja replaced offspinner Harbhajan Singh in India’s Test squad. Harbhajan, who had been out of the Test side since March 2013, made a comeback during the Bangladesh tour in June. He played the only Test of that series and the first Test of the Sri Lanka tour in August – in which he only picked up one wicket in 25 overs in spin-friendly conditions – before sitting out the second and third Tests.

Since being dropped from the squads for the Test series in Bangladesh and Sri Lanka, Jadeja has topped the wicket charts after three rounds of the Ranji Trophy – with 24 in two matches at an average of 8.25. He has also scored 91 and 58 in two innings for Saurashtra.

“We don’t discuss just 15 players. We consider domestic performances,” the chairman of selectors Sandeep Patil said. “The kind of pitches that we will play on, the opposition, and keeping that in mind we have picked Jadeja.”

Fast bowler Ishant Sharma was named in the Test squad despite being ineligible for selection for the first match because of a suspension slapped on him by the ICC for bad behaviour during India’s tour of Sri Lanka. Ishant was ruled out of the last two ODIs against South Africa, afterinjuring his hamstring during Delhi’s Ranji Trophy match against Haryana, but is expected to be fit in time for the Tests.

Seamer S Aravind replaced fast bowler Umesh Yadav in the ODI squad for the remaining two matches of the series, which South Africa lead 2-1. Umesh had been left out of the team for the third ODI in Rajkot after conceding 2 for 71 and 1 for 52 in eight overs in the first two matches of the series. Aravind had played the first T20I in Dharamsala, where he took 1 for 44 on debut, but did not play the next two Twenty20 fixtures.

The BCCI also named the Board President’s XI – led by Cheteshwar Pujara – to play South Africa in Mumbai on October 30 and 31. That group of 13 players included Rajasthan fast bowler Nathu Singh, a 20-year old fast bowler who took 7 for 87 on first-class debut against Delhi.

“We are looking for something special,” Patil said. “For the last three years two selectors accompany the Indian team, but the rest travel all over to watch domestic cricket. We have seen a glimpse in Nathu Singh. We want to give him the chance.”

The final two ODIs of the series are on October 22 and 25, and the first Test begins on November 5 in Mohali.