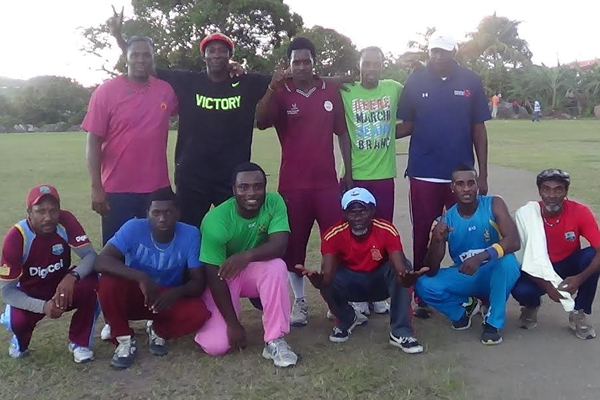 The Tonito Willet led team, won the toss and elected to bat first in the grand finals of the league.

They amassed a challenging 120 for 4 in their allotted 10 overs, led by a scintillating 49 not out by Willet himself.

The Butlers team initially flattered to deceive with impressive opening encounters with Theron Bussue and Winston Sutton looking good at the top. Venrick Newton also struck a couple of impressive boundaries, but once he departed, so too departed his team’s chance of a possible victory.

It took another mean final over from Sylvester Browne to seal the deal, with Tonito Willet using six slips and three gullies for the final delivery, to make an emphatic point. The Butlers team succumbed to 104 for 5 in their allotted 10 overs, thereby handing victory and the $500.00 cheque to the JAH Bass team.

In the first match of the afternoon, to determine the third placed winner, Empire disposed of Thrash Dem Out.

Empire batted first and scored 78 in 8 overs and in response the Thrash Dem Out team could only muster 55 for 7.

A brief presentation ceremony was held at the end of the final game, chaired by chief coordinator of the league, Michael WISE Herbert.

Hon. Tory Liburd spoke on behalf of the Nevis Island Administration and significantly indicated that his government had committed to the general improvement of the Hard Times playing field for future tournaments.