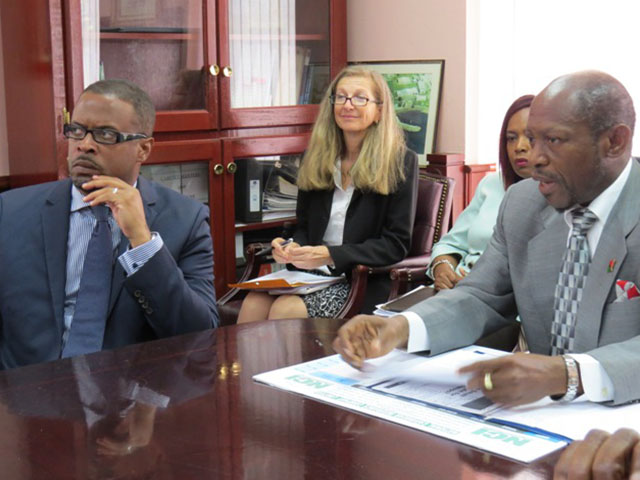 Basseterre, St. Kitts (CUOPM) – The Jamaica Gleaner newspaper is lauding the Government of St. Kitts and Nevis for returning US$40 million of funds provided by the International Monetary Fund (IMF) under a three-year Stand-By Arrangement (SBA).

In its Tuesday Talk column, under the heading: “Impressed by Small Island,” the 180-year-old paper Jamaican daily newspaper said: “There are many green-eyed politicians in the region puzzled by the brawn of tiny St Kitts, which has found it possible to return money to the IMF. Some say it is their innovative citizenship programme that has enabled them to reap success. Whatever it is, we salute them and wish our local politicians had half the savvy to keep us out of the clutches of the IMF.”

Minister of Information, Sen. the Hon. Nigel Carty in a post cabinet briefing disclosed that in light of the overwhelming success of the IMF-monitored home-grown structural reform programme leading to the creation of a strong fiscal and economic position for the Federation of St. Kitts and Nevis, Cabinet considered and approved the return of approximately US$40 Million to the IMF that was provided for under the standby arrangement with the institution.

“The money was made available by the IMF so that in the event of it being required to provide additional financial support during the reform period, it could have been readily available. The decision to return the unused loan funds to the IMF is consistent with government’s policy to continue to reduce its debt and to adopt a higher level of fiscal discipline going forward,” said Minister Carty.

He said then that the fiscal situation and performance of the economy in St. Kitts and Nevis has steadily improved over the last few years and has allowed for the return of US$40 million loan to the International Monetary Fund (IMF).

In 2011, the Federal Government engaged in a three-year Stand-By Arrangement (SBA) with the IMF to the tune of US$84.5 million. The structural adjustment programme was developed by the local government as part of debt restructuring initiative.

At the completion of the ninth and final review by the IMF this week, a positive report was delivered as it showed a 3.8 percent economic growth, a surplus of 12.2 percent of GDP (Gross Domestic Product), as well as a 61 percent reduction in public debt to 104 percent of GDP. Debt reduction is reportedly “on a sustainable path, projected to reach a low of 60 percent of GDP in a few years.”

Autopsy Performed On The Body Of Rochelle Bennett