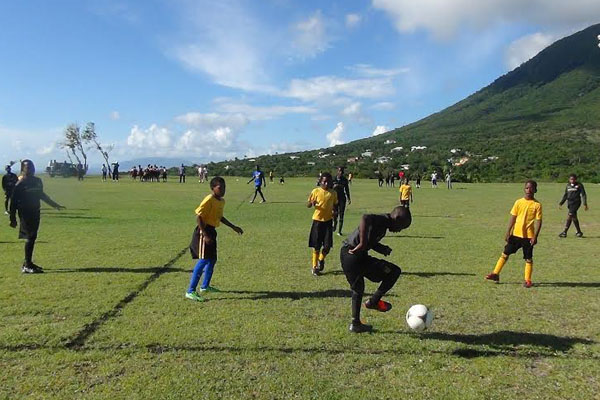 The players shook hands and the coaches for both teams seemed satisfied that the two schools would have shared honours on the day.

This as the action continued in the Giant Malt sponsored Primary Schools Football league on Monday 3rd November.

In match one, the Elizabeth Pemberton Primary and the Jocelyn Liburd Primary schools drew nil-nil, in a B division fixture.

It was a hard fought game but both teams missed clear chances.

In match two, it seemed like another drawn game heading well into the final half of the game, as both schools went head to head in an A division fixture this time.

However, Rion Solomon for the JLPS team made a breakthrough and as he peeled off a right booter, the EPPS goalie seemed to move out of the way and the ball hit the back of the net.

Within minutes however, Akeem Lewis for EPPS found himself clear down the middle and bombed home a scorcher to tie the game, moments before the final whistle from Referee ZIGGY Newton.
Final score: EPPS 1 JLPS 1

Director of Sports, Jamir Claxton has indicated that there will be a draw on Wednesday 5th November for the final four teams in both divisions as the league heads into its climactic stage.