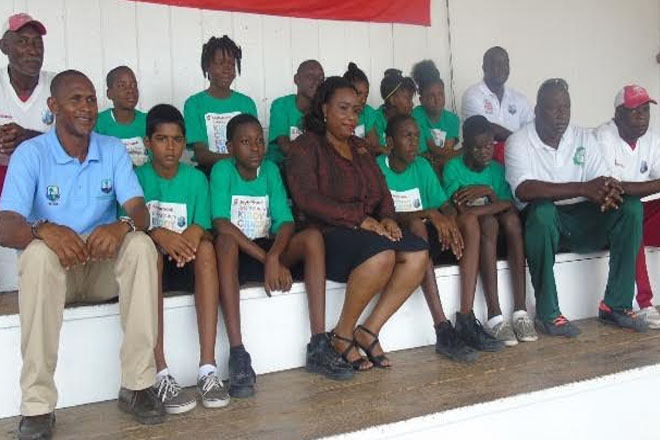 Sports Page — The finals of the Kiddies Cricket Program sponsored by Scotia Bank, culminated at the ET Willet Park on Friday 19th June.

The matches were preceded by a brief ceremony which was ably chaired by Nevis Cricket Association representative, Stascius Wallace.

The invocation was rendered by Coach at the Jocelyn Liburd Primary School, Kurvin Wallace.

He described the event as an opportunity to have fun but yet develop the basic skills of cricket.

He noted that persons have graduated from the Kiddies Cricket Program, through the various levels of competitive cricket hosted by the WICB.

He challenged the NCA to harness the talents that come out of the program and wished the teams every success.

Mr. Wallace spoke on behalf of the NCA. He thanked Scotia Bank and the WICB for such an innovative program and challenged the children to play hard and indicated that the NCA will continue to support the program and the budding cricketers.

Manager of the Nevis branch of Nova Scotia, Ms Ebony Harp, noted that the Kiddies Cricket Program was introduced in the federation in the year 2000 and noted that it helped children develop such values as sportsmanship and also to develop their skills in the game of cricket.

She stated that the skills learnt will last for a life time and will serve to guide the young cricketers throughout every aspect of their lives.

She then officially declared the event open.

Shortly thereafter the cricketers hit the field with some intense and exciting cricket action.

Batsman with the most runs – Dante DeCosta of VOJN