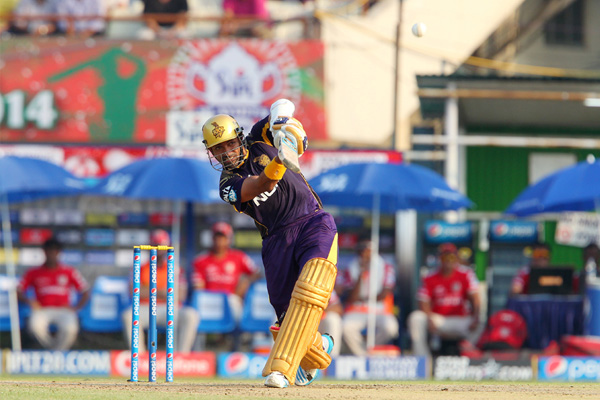 Knight Riders through to final after Kings XI unravel

Sports Page — Kolkata Knight Riders eased into the IPL final with their eighth-successive win, beating a listless Kings XI Punjab at Eden Gardens. Robin Uthappa prolonged a stellar season and took the record for the most runs scored by an Indian batsman in an IPL season. Gautam Gambhir, though scratchy with the bat, had helmed an impressive turnaround by Kolkata Knight Riders. The satisfaction of making the final was sweetened all the more when both players returned into national reckoning. Uthappa found a place for the ODI tour of Bangladesh and Gambhir could contemplate a Test comeback in England.

Rain tends to favour chasing teams, if it’s impact is expected. On Wednesday, sunny skies welcomed Kings XI and Knight Riders but as the evening waned, the weather soured. Kings XI would not have been flustered by a target of 164, but the advent of a non-stop drizzle in the third over meant they had to tackle one of the wilier bowling attacks with the prospect of the match being curtailed at any given moment. Having fallen behind the Duckworth-Lewis equation, one of the most assured batting line-ups suddenly looked out of their depth, but they have another crack on Friday when they meet the winner of the eliminator.

The jitters began when Manan Vohra, empowered by a few solid hits, miscued to long-on. His 26 off 19 had originally put Kings XI ahead on the rain rule but now they were four runs behind par. Glenn Maxwell’s attempts to dance around the crease to upset the bowler’s rhythm backfired when he was found plumb in front. Kings XI were 11 behind and the downward spiral steepened.

Umesh Yadav was not among those bound for England in July. His chosen way to vent was an opening spell of 2 for 12 in three overs. As rain persisted, the batsmen were uncertain regarding the length of the match and the approach they should employ. If they took undue risks and the game ended up lasting the 20 overs, they could end up without enough batsmen. If they didn’t press on, Knight Riders would clinch the game with ease.

Wriddhiman Saha and David Miller flailed at the crease, attempting to hit on the up and hack across the line, and by the time their struggle came to an end their side was more than 20 runs behind the Duckworth-Lewis equation.

With the umpires doing their best to ensure a full game – at one point they waved the invading groundsmen off the field to ensure five overs of the chase were completed – the Knight Riders spinners continued the strangle. Shakib Al Hasan and Piyush Chawla grabbed a wicket each, while conceding only 11 runs in three overs, as Kings XI meandered to 97 for 6 in after 16 overs. George Bailey attempted a counterattack, but Sunil Narine kept the penultimate over to four runs to all but seal the result.