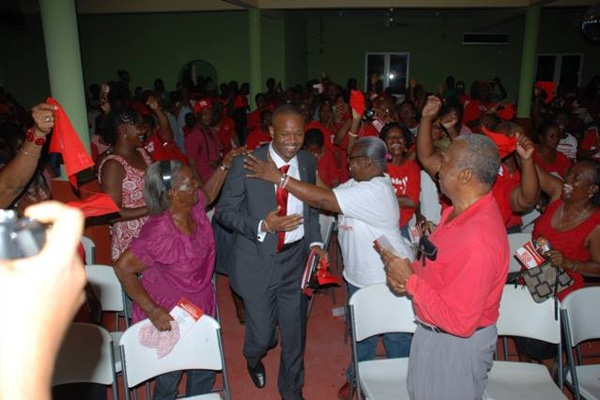 BASSETERRE, ST. KITTS (CUOPM) – The newest addition to the governing St. Kitts-Nevis Labour Party (SKNLP) slate for the next general election, Mr. Konris Maynard, has denied allegations that he accepted money to be a candidate for St. Christopher 3 (West Basseterre)

“Now you said you ‘know me,’ but clearly, you don’t, because you are suggesting that money is more important to me than the service of my country, then clearly you do not know me,” the 30-year-old engineer told Valentine (Val T) Thomas during his first radio interview since his introduction on Freedom FM’s “Issues” on Monday.

“I would give up everything to see my St. Kitts and Nevis a better place, FULL STOP!,” said Maynard, who was introduced to hundreds of constituents in the West Basseterre Constituency last week Thursday.

“Now let’s deal with the insinuations that you have casted here. Number 1 – I was employed by SOL Petroleum which is a regional company. I did not interview to go to Tortola. When I interviewed here, because of my experiences and so on, they offered that position because my qualifications fit what they were looking for there and it was a very good opportunity for me to do professional development and it helped me tremendously, because I was placed in a position of managing the operations and that helped me tremendously as a professional,” said Maynard, who obtained a Bachelor of Science degree with First Class honours in Electrical and Computer Engineering from the University of the West Indies (UWI) in 2007 and a Master’s degree in Electrical and Computer Engineering from the University of Waterloo in 2009..

Mr. Maynard used the opportunity to send a message to young people of St. Kitts and Nevis, most of whom are locked into the popular 106.5 FM daily.

“I would encourage people to never think small minded about their personal development,” he said.

Mr. Maynard said he intended to work in Tortola for two to three years and was being paid based on his qualifications.

“But it hasn’t been 3 years, so that I can have that opportunity to advance myself and become a more well-rounded professional. So that is why I took up the call that the company offered me to go there, because initially I was supposed to be working here with SOL in St. Kitts,” said Mr. Maynard.

Responding to the question of what inspired him to return to St. Kitts and Nevis to serve, he said:

“I don’t mind if I have to plant potato in my backyard, if nothing is there. You have to understand that this is really significantly more than money or anything like that for me and it’s disheartening that we cannot believe that people are willing to serve for that and so in this process, I have made it clear that I requested nothing, I received nothing in exchange to run for political office, let me make that clear.”

“I requested nothing and I received nothing in exchange to run for political office in Constituency #3. I am doing this as all of my songs, all of my art in the calypso field, all of my life has shown that I am doing this out of a desire so that one day, my children, my grandchildren can be in a significantly better place in a few years, than we are now,” said Maynard, known in the calypso arena as “King Konris.”

He told listeners that he has consistent and constant dreams of where he sees his little island of St. Kitts and Nevis.

Simple things like that, I am always thinking about how can I better and how can I contribute to the advancement of my people. And this goes for the different things that I see in Constituency #3.”

“So I understand where your insinuations are coming from but they are totally unfounded and I am doing this out of a real love for my country,” he told Thomas and listeners to the popular radio talk show hosted by Juni Liburd.