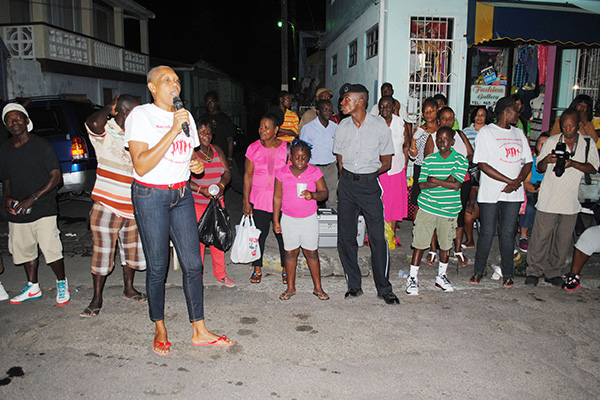 While addressing the large crowd that had turned out, and which included Prime Minister and St. Kitts Nevis Labour Party’s Political Leader, the Rt Hon Dr Denzil Douglas, Parliamentary Representative the Hon Marcella Liburd pointed out that the theme for the week of activities was borne out of the fact that one cannot serve if they do not love.

“Service is unconditional, and we give selfless and unconditional service in Central Basseterre,” said Hon Liburd, who is also the Federal Minister of Health, Community and Social Development, Culture and Gender Affairs.

“It means that we have to love people, and I am mean; really love them regardless of their condition, regardless of their state – that is what we do. We watch no face. We love everybody in Central Basseterre and indeed the entire country, and that is what we are in Labour. We believe truly in love; we love you dearly from the bottom of our hearts.”

The area parliamentary representative thanked all those who were involved in the planning of the event, and observed that the Grand Masters Band turned out at very short notice to entertain, an action for which she thanked them. She also thanked the Huggins Masquerades of Central Basseterre who also entertained the charged crowd.

“Central Basseterre embraces diversity,” said Hon Liburd. “That is why tonight we had the Spanish community doing an item while the Guyanese and the Cuban communities were supposed to have performed, but whenever they show up, you will hear from them, for we embrace everybody in Central Basseterre and indeed in Labour.”

The honour of cutting the ribbon was given to Ms Amethyst Prentice of Upper Prickly Pear Alley. After the office doors were swung open, those in attendance, led by the Prime Minister and, the Hon Liburd, streamed into the office for a first hand inspection. The ceremony ended with a short video presentation portraying the theme, ‘Love Through Service’ because, as Hon Liburd put it, “we strongly believe that you cannot serve if you do not love.”