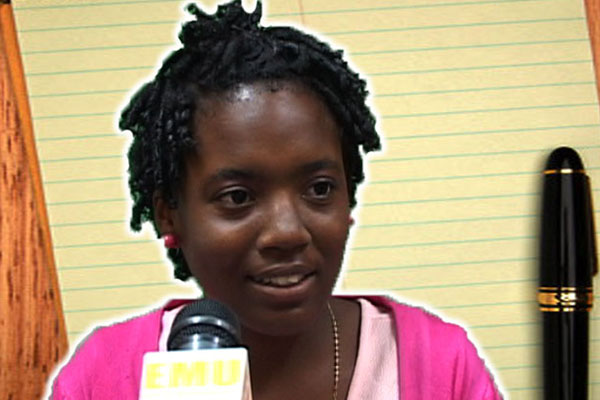 Basseterre, St. Kitts (SKNIS) — Laniqua Williams of the Verchild’s High School stood out from among competitors in the ECLAC Caribbean Essay and Poster Competition to gain top prize in the essay division.

The Economic Commission for America and Latin the Caribbean (ECLAC) competitions were geared towards raising awareness on the part of the youth of the Caribbean regarding the sustainable development objectives of Caribbean small island developing states.

Fifteen-year-old Laniqua centred her essay around improving the education system in small island developing states. She suggested that foreign languages, technology and creative fine arts should be promoted in schools.

Laniqua stated that while she was surprised at the outcome, the work she put in came natural to her.

“It was rather thrilling to win such a competition,” she revealed.  “It also builds my self-confidence because I never thought that someone like me could win a competition this big. However, whenever I want to do any kind of work, I put my mind to it and I put out all my skills to be successful. So, it wasn’t all that challenging.”

Ms. Williams stated that her English Language teacher Jonace Hall-Herbert encouraged her to enter the competition because she realised Laniqua’s exceptional writing skills.

Ms. Hall-Herbert stated that “she is an avid learner, hard working, persistent and always willing to do extra work. She is also very well organized and structured. She has drive and ambition and really wants to succeed unlike many children today.”

The competition was part of the celebration of the International Year of Small Island Developing States (IYS).