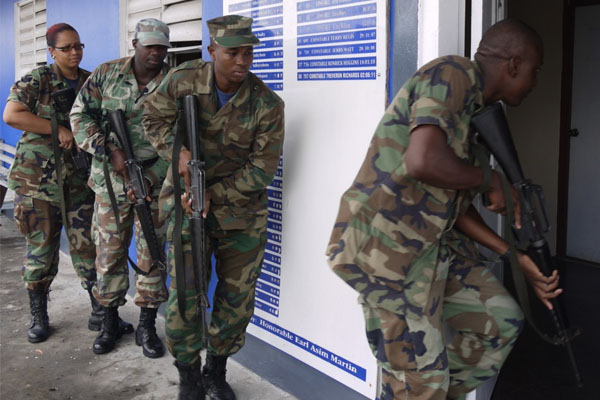 At the Commissioner’s Award and Lecture Presentation on Tuesday, (December 17) Commissioner of Police Celvin G. Walwyn explained that opportunities will be provided for local officers to train in Columbia, Mexico, Chile and Costa Rica. A new relationship has also been developed with law enforcement in Portland, Oregon in the United States of America.

He credited Astona Browne, Permanent Secretary in the Anti-Crime Unit for facilitating these new linkages during meetings with international partners.

“I want to thank to the Prime Minister [Right Honourable Dr. Denzil Douglas] and Mrs. Astona Browne of the Anti-Crime Unit for the support that they have given to the police force in terms of equipment and training … in 2013,” the Commissioner expressed.

He singled out one of the tactical units which benefitted tremendously from these efforts.

“The SSU (Special Services Unit) is one of the best qualified units within the police force right now,” Walwyn revealed. They have new equipment, they’ve received a lot of training this year and most of it was done in part because of the assistance of the Anti-Crime Unit and especially Ambassador Browne …”

Officers have benefitted from the experience of trainers from various international partners. These include the Federal Bureau of Investigation (FBI), Drug Enforcement Administration (DEA), Florida National Guard, Orange County Sherriff’s Office in Orlando, Florida, Harris County Sheriff’s Department in Houston, Texas, the Bureau of Alcohol, Tobacco, Firearms and Explosives, as well as the Regina Police Force in Saskatchewan, Canada.

Commissioner of Police Walwyn added that the local community is the most important partner the force has and explained that their support is needed to ensure continued success in law enforcement for 2014 and beyond.