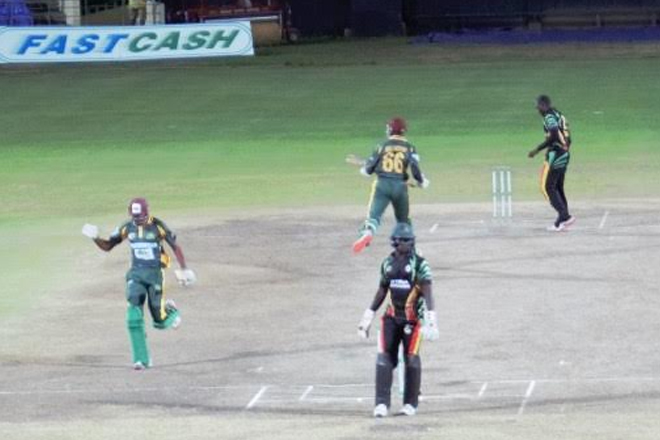 (ZIZ News) – The Leeward Islands Hurricanes team secured its first win of the 2016 Nagico Super50 Tournament, on Wednesday, against the CCC Marooners.

Nkrumah Bonner knocked a brilliant 79, while Montcin Hodge added 66 to help the Hurricanes reach 242 in the first innings.

Chasing 243 to win, the Marooners were bowled out for 228 runs, giving the Hurricanes a 14-run victory and moving them to six points on the table.

The bowling of Rakheem Cornwall and Daron Cruickshank down the stretch, assured victory for the Hurricanes.

Cornwall finished with four wickets for 21 runs while Cruickshank took 3 for 28.

Hurricanes’ Coach Reginald Benjamin, speaking about his team’s first win of the tournament, said the win was good not just for the team but for the people of the Leeward Islands.

He added that the batting and bowling performed well but noted the fielding is still a work in progress.

Meanwhile, the Windward Islands Volcanoes edged the Guyana Jaguars to win by two wickets at the Warner Park Cricket Stadium.

A strong performance from the lower order helped the Volcanoes to their total of 210 for 8, in response to the Jaguars score of 209 for 8.

That win placed the Windward Island Volcanoes at the top in Zone B with 14 points. The Guyana Jaguars remain in second position with 10 points.