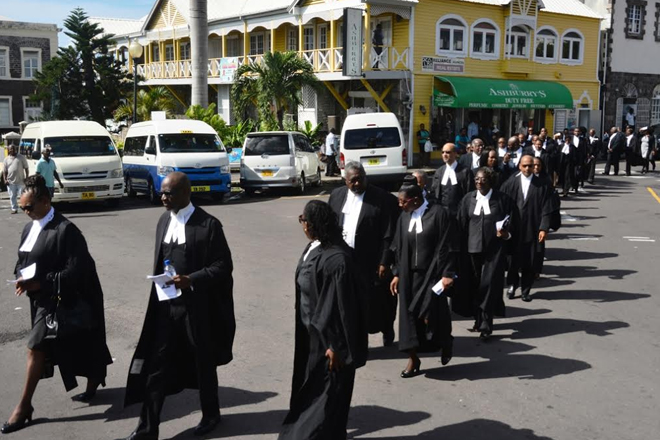 (SKNIS): The Government of St. Kitts and Nevis has reassured the legal fraternity of its continued support as it seeks to uphold the integrity of the judicial system and ensure it functions as a strong, impartial and independent body, during the launch of the start of the new law year 2016-2017 held in St. Kitts on Tuesday, September 20, under the theme “The Eastern Caribbean Supreme Court: The Movement Towards an Accessible Court”.

Honourable Vincent Byron, Attorney General, gave a brief account of matters pertaining to the justice and legal affairs of St. Kitts and Nevis.

“We have seen over the past year the establishment of the Criminal Justice Strategic Board (CJSB) as part of a comprehensive response to law and order, public safety and security in our country,” said the Attorney General. “This Board incorporates those institutions, the agencies and persons who are a part of our criminal justice system including police, prison, the courts, probation, youth justice, Defence Force, Customs, Fire and Rescue Services and Education. All are a part of it and will play a role in determining the quality of the criminal justice system.”

The Attorney General stated that as the Board continues to meet and working as a team to change the culture of crime fighting in the Federation, it is the Government’s hope that every entity be mindful of how the efficiency and effectiveness bear on the work of the other. He also spoke to the strengthening of the Director of Public Prosecutions Office (DPP) by hiring the services of a Queen’s Counsel, which resulted in a noticeable difference of completing cases and a significant increase in the backlog from last year.

The Attorney General also used the occasion to recognize the work carried out by the St. Kitts and Nevis Legal Aid and Advice Centre that has provided low cost legal services and representation to numerous persons.

“The Centre is involved in significant programmes of community outreach and has conducted clinics in some 20 rural communities since January 2016 on a wide range of matters including juvenile matters, maintenance, personal injury, and landlord and tenant just to name a few,” he said, while adding that the Centre works closely with the Department of Social Services and Community Development.

Attorney General Byron stated that the Legal Aid and Advice Centre will be engaged in an outreach programme in the Independence Square on Friday, September 23. He encourages the society at large to go out and obtain information and familiarize itself with the workings of the Centre.

The new law year opened with a church service at the Wesleyan Methodist Church in Basseterre. It was attended by His Excellency S. W. Tapley Seaton, Governor General, Mr. Michael Morton, the Governor General’s Deputy, Honourable Vance Amory, Premier of Nevis, Members of the Police High Command, Members on both sides of the Parliamentary Isles, judges, lawyers, magistrates and other distinguished members of the inner and outer bar, as well as other guests. From the church, the lawyers marched through the streets of Basseterre before culminating at the Sir Lee Llewellyn Moore Judicial Complex located at East Independence Square.