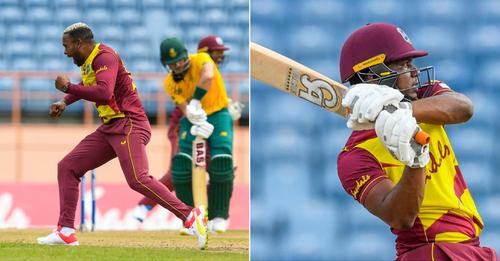 West Indian duo Evin Lewis and Fabian Allen went upwards in the T20 International rankings. Lewis is now ranked as the World number 10 batsman while Allen is ranked at number 20 in the bowling rankings.

The West Indies are currently hosting South Africa in a five-match T20I series, which the visitors are leading 2-1 after three games. Only two of those games counted in the latest rankings update, and Lewis, who smashed 71 off just 35 balls in the opening game, has moved up from No. 13 to No. 10 among batters, while among bowlers, Fabian Allen has gone from No. 43 to No. 20.

For England, who beat Sri Lanka 3-0 at home, bowlers Chris Jordan, Mark Wood, Sam Curran and David Willey have all progressed. Jordan has gone up five spots to No. 11, Wood 11 places to 14th, Curran 62 spots to 39th, and Willey 23 places to No. 51. For Sri Lanka, Wanindu Hasaranga has moved up five places to fifth and Dushmantha Chameera 41 places to No. 43 among bowlers. Meanwhile, at the end of the quadrangular T20I tournament in Sofia, which Romania won by getting the better of Bulgaria, Greece and Serbia, their batter Ramesh Satheesan entered the top 100, moving up 101 spots to No. 95 after topping the batting table with 197 runs from five innings, his runs coming at a strike rate of 209.57.