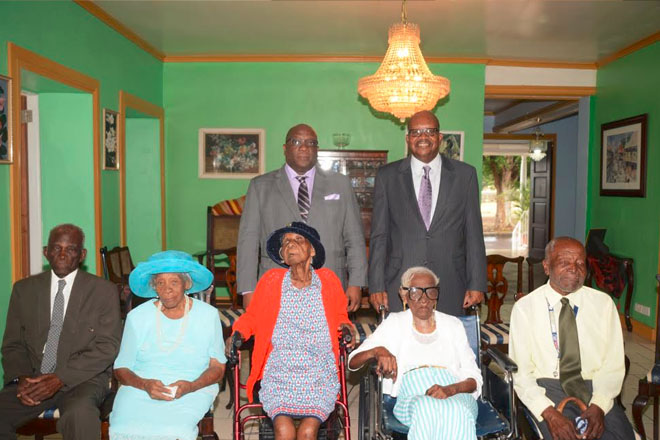 (PRESS SEC) – The very first National Centenarian’s Day held in St. Kitts and Nevis on May 31st, 2016, honouring persons who have reached the age of 100, and the 80th birthday on April 12th of our first Prime Minister, Dr. the Right Honourable Sir Kennedy Alphonse Simmonds, have brought to the fore that Kittitians and Nevisians are living longer.

Indeed, living to the age of 100 is becoming an increasingly achievable milestone in St. Kitts and Nevis.

The centenarians in St. Kitts are Ismay Sweeney who is 105 years old; Gladys Williams who is 103 years old; Louise Isaac who is 102 years old; Alfred Tyson who is 101 years old, and Una Duporte, Samuel Depusoir, Amos Davis, and Edward Bailey who are 100 years old.

However, more and more men are living into their 70s and beyond, due to advances in healthcare, increased visits to doctors and other reasons, such as an improved quality of life that is associated with a positive attitude. Countless reputable studies link a happy, optimistic outlook to a healthy heart and long life, in part because people with a positive attitude are more likely to exercise and have supportive networks of family and friends. Hence, they manage stress and adversity more effectively and get sick less often.

Dr. the Right Honourable Sir Kennedy Simmonds is a member of this club. On his 80th birthday, family and friends streamed through his house during the course of the day, and he expressed gratitude for the blessing of life when Prime Minister Dr. the Honourable Timothy Harris and members of Cabinet visited him.

“I propose to live today while I have the opportunity; not to live it day by day, but to live it moment by moment and to savour the fact that God has given me the opportunity, the privilege, to be 80 years old today,” Dr. the Right Honourable Sir Kennedy Simmonds said. Sir Kennedy told Prime Minister Harris that he plays tennis several times a week. “I’d like nothing better than to be playing tennis on my birthday,” the 80-year-old National Hero said with a smile.

Dr. Harris was smiling, too, when he noted at his May 30th press conference the trend of more people – and, encouragingly, more men – attaining the age of 70 and even 80 years old and upward.

The Prime Minister recognized Mr. Richard Caines, a successful businessman and Operation Rescue and PAM Party co-founder, who attended the press conference. “As Mr. Caines has shown us, age is just a number. It doesn’t prevent him from taking the longest walk each day,” Prime Minister Harris said about the avid walker, who celebrated his 80th birthday at Sprat Net on October 4th, 2012, surrounded by his family, friends and colleagues, including Sir Kennedy and Lady Simmonds.

Prime Minister Harris commended his good friends, the loving couple Mr. and Mrs. Ben and Telca Francis, who celebrated their 50th wedding anniversary on May 25th, 2016. The Prime Minister also congratulated both Mr. Bill Ewing, who in 1983 founded the St. Kitts-Nevis Cable Communications, Ltd. (The Cable), and Mr. Valentine Grant, an entrepreneurial fixture in the Cayon community, on turning 80 years old.

“I wish all of those who have enjoyed long life even a better standing in terms of their health and longevity,” Dr. Harris said, adding that, “Our people are living longer and we have to find out why. We have to get these stories captured, so that they can become a source of inspiration for many of our people.”