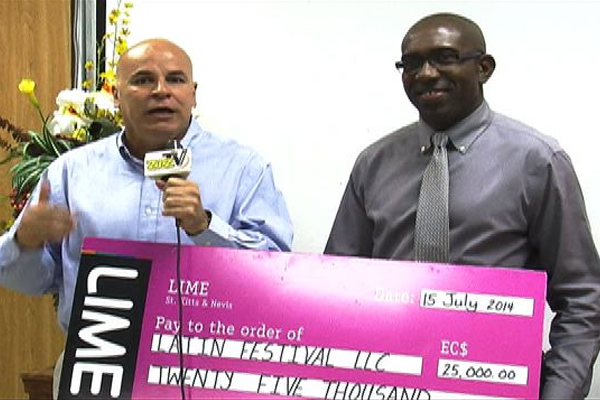 ZIZ News — Telecommunications Company, LIME, has solidified its commitment to Latin Festival St. Kitts and Latin Fiesta 2014 with a cheque of $25,000.

During a brief handing over ceremony at LIME headquarters at Needsmust Estate on Tuesday, LIME’s General Manager David Lake said his company was honoured to be affiliated with the festival.

“I would like to encourage those of you who have not come to this event to make sure that you come this year,” he said. “Last year was the first year that lime came onboard and I was at that event and trust me, I had a ball. I had an absolutely wonderful time. I did try my hand at a little bit of the dancing. I wasn’t able to nab any of the prizes for the longest couple on the floor and the like but I had a ball and I’m encouraging all of you out there who are listening to this little broadcast this evening to make sure that you attend this year’s festival.”

“It really is a great pleasure for us to receive that cheque, that contribution from LIME,” he said. “LIME has become a partner of Latin Fiesta since last year. It’s more than a sponsor. It’s a partner with us. This is the fifth anniversary of the Latin Fiesta. We plan to have a huge week of events. Remember this is not only a day event, it’s a total week of events that includes movie presentations, worship, finishing October 26th at the Marriott Beach that is going to be the Latin Fiesta that we going to have, like David said, we going to have a ball.”

ZIZ Broadcasting Corporation is also one of this year’s sponsors.