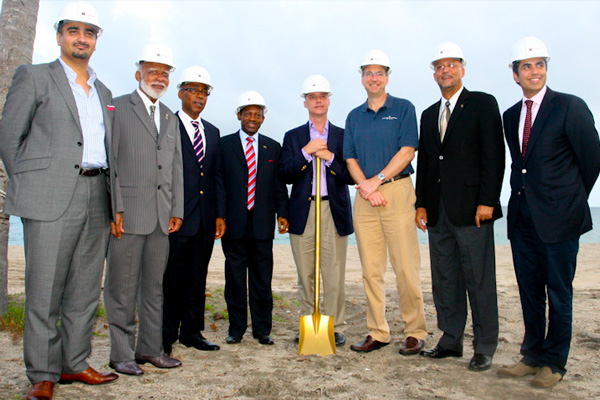 Basseterre, St. Kitts, (CUOPM) – Range Developments, a leading Dubai-based hospitality developer has announced the appointment of Kier, a well-established global construction company based in the UK, for phase one of its Park Hyatt St. Kitts project.

Kier is part of the Kier Group (plc.) which is a publicly listed FTSE 250 company with significant Caribbean experience.

The Park Hyatt St. Kitts project, planned for completion in 2015, will produce a world-class resort hotel at Christophe Harbour, a 2,500-acre resort community being developed on the Caribbean island of St. Kitts.

Phase one of the Park Hyatt project will construct 134 luxury rooms and related service facilities, conceptualized around a Caribbean village theme.

The Park Hyatt site is located at Banana Bay, on St. Kitts’ picturesque southeastern peninsula which is well known for its spectacular hill-side views across to the nearby sister island of Nevis.

“We are very pleased to award this construction contract to Kier whose goals and values are aligned with those of Range Developments. This is another major step towards the timely completion of our St. Kitts development and we are confident this collaboration with Kier will ensure the highest standard of quality is maintained throughout the development,” said Mohammed Asaria, Vice Chairman of Range Developments.

Kier has worked on projects across the world including the United Kingdom, Asia Pacific, Middle East, Eastern Europe & the Caribbean.

Established in the year 1928, Kier Group has an impressive track record and has won numerous awards, including the British Contractor of the Year in 2012. Kier is known for their adherence to international standards and accuracy in delivering their projects.

Kier has a great track record of working in the Caribbean for over 50 years and have constructed prestigious Resort Projects in St. Lucia, Barbados, Antigua, Jamaica and are currently constructing a hotel for a major hotel chain in Haiti.

Prime Minister of St. Kitts and Nevis, the Right Hon. Dr. Denzil L. Douglas, welcomed the appointment of such a reputable general contractor for the Park Hyatt project which he described as “an important component of the vision for the overall Christophe Harbour development, and a vital ingredient in his Government’s economic transformation strategy which includes the creation of quality jobs for residents of St. Kitts and Nevis.”

Corporate Social Responsibility (CSR) is an important dimension to Kier’s business strategy and they fully appreciate the importance of working with the people of St. Kitts to enhance the economy and promote good community relations.

Kier will ensure that economic opportunities are maximized by providing employment during the construction of the project and also by maximizing the use of local material resources.