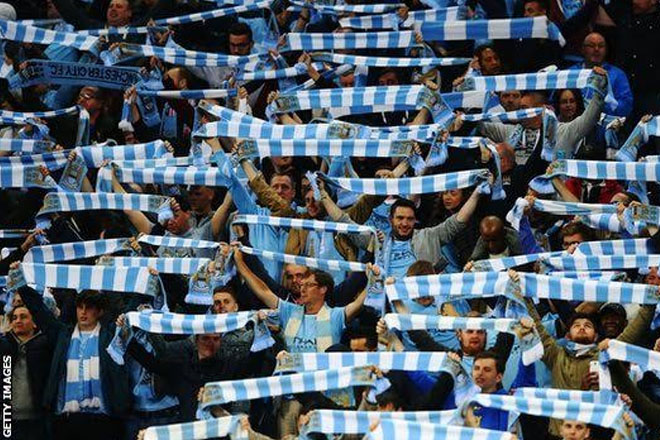 (BBC) – Manchester City manager Manuel Pellegrini has defended his club’s fans after a Uefa disciplinary case was opened against them for booing the Champions League anthem.

City will attend a hearing next month after the incident, which took place before Wednesday’s 2-1 win against Sevilla at Etihad Stadium.

“I don’t know why Uefa think this about our fans,” said Pellegrini.

“They pay for tickets and, with respect, can express what they feel.”

Last year a City fan group led a protest against European football’s governing body after 650 CSKA Moscow supporters gained access to the Khimki Arena for their Champions League game, despite the Russian club being ordered to play it behind closed doors.

No problem with Kompany

Pellegrini also told a news conference that he had a good working relationship with Manchester City captain Vincent Kompany, a surprise omission from the City starting line-up against Sevilla.

Kompany remained on the bench until he replaced matchwinner Kevin de Bruyne in injury time, with Nicolas Otamendi and Eliaquim Mangala named at the heart of the home defence.

The Belgian had missed club games in the run-up to the international break with a calf problem and his manager thought Kompany would also miss Belgium’s final two Euro 2016 qualifiers, only for the 29-year-old to feature for almost an hour of the 3-1 win over Israel on 13 October.

“I’m not punishing Vincent,” said Pellegrini, whose side visit local rivals Manchester United on Sunday. “I don’t have a problem in my relationship with Vincent.

“It was important for him to work some days before he returns to the team and we need to choose the best starting XI.

“Mangala and Otamendi are doing well.”

Playing down the derby

While City were at home on Wednesday, their opponents did not return from their Champions League trip to CSKA Moscow until Thursday afternoon.

“I don’t think that will be a key factor,” said Pellegrini, who has won three of his four games against United as City manager.

“It is a match of six points and for the city it is a special game. But it is not one that will decide the title.”

City will be without striker Sergio Aguero on Sunday, as the Argentina international is out for a month with a hamstring injury.

Former Arsenal midfielder Samir Nasri will be missing for at least another three weeks with a hamstring injury.

“I think it will be difficult for Samir to return before the international break,” said Pellegrini. “I hope he will be back after those 10 days.”