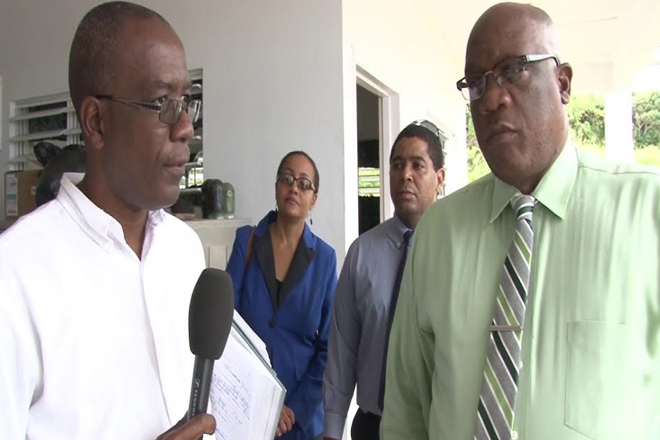 Mary Charles renovations on schedule for completion at end of March

(SKNIS): Renovations at the Mary Charles Hospital in Molineux, St. Kitts are on schedule for completion on March 31, according to Keith James, who was awarded the contract to complete the work which commenced January, 2016.

Prime Minister Dr. the Honourable Timothy Harris who toured the facility on February 11, expressed pleasure at the upgrades taking place, noting that residents of the area, which is the Keys to Saddlers Medical District, would be more at ease.

“I know that those who feel somewhat displaced, as the construction work is taking place, will certainly be heartened to know that the project is moving apace and it is expected to be completed on time,” Prime Minister Harris said. “When we have the official reopening of this facility, it should be a state-of-the-art facility – one cured of all the defects that have hitherto been discovered.”

Minister of State responsible for Health, Honourable Wendy Phipps, was part of the touring delegation. She explained that an assessment had been done of all of the health facilities in the Federation in early 2015 and a prioritization schedule determined. Mary Charles was near the top of the list and it was decided that renovation would commence in January this year. Minister Phipps showed how the upgrade would help to advance the type of medical equipment that can be used at the facility.

“To date the unit is only housed with 220 electricity, and of course a lot of our more modern medical equipment would be running on 110 power,” Minister Phipps said. “So it makes it more convenient to have access to new and more modern pieces of medical equipment, so that we can get the kind of care to the patients and residents in this surrounding area in a faster manner.”

Currently placed at a project value of $635,000, the renovation at Mary Charles is being overseen by the Public Works Department. Cromwell Williams, Director of Public Works, specified that the roof, in particular, was badly in need of repairs and so while work began there, other areas were also in need of restoration.

“We decided that we needed to do, more or less, a more comprehensive retrofitting or rehabilitation, which would include of course painting, plumbing, electrical work and so forth,” Mr. Williams said. “The hospital was built quite a number of years ago and definitely is now due for that kind of enhancement.”

Repairs include remodeling the kitchen, which will receive a facelift including new cupboards. Likewise the bathrooms will receive new toilets and the like.

The renovation at Mary Charles is made possible through public-private partnerships.