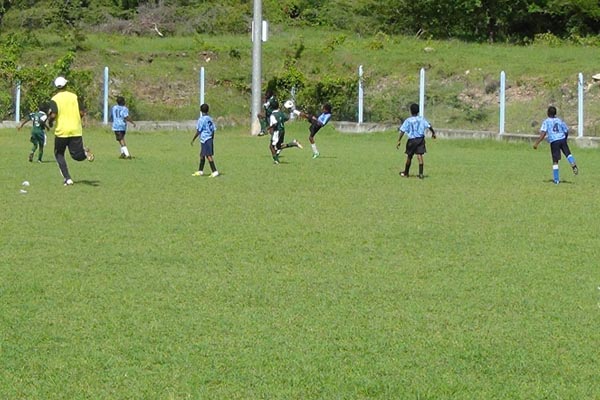 (Sports Page) Two stunning goals by Ammani Williams, put the Maude Cross Preparatory School in the ascendency versus the St.Thomas’ School. It was an A division fixture.

This as action continued in the Giant Malt sponsored Primary School league on Thursday.

Young Williams released a powerful right booter from almost mid field, which sailed over the goal keeper’s head and into the back of the net.

He followed this up with a solo run after a defensive lapse by the St.Thomas’ team, and beat the opposing goalie with a sizzling left booter, which left him flatfooted.

Maude Cross preparatory won the game with a score line of 2 goals to nil.

In the second game of the afternoon, the Lyn Jeffers Primary School may not have been given the ghost of a chance versus the St.Thomas’ primary B team but shocked everyone when they struck the back of the net first.

As a matter of fact, to add to the frustration of the St.Thomas’ Primary School’s coach, Eddy Caines, the Lyn Jeffers school held on to the narrow lead, right up to the half time whistle.

However, after a quick word from Coach Caines, the St.Thomas’ Primary team came out in the second half, obviously reenergized and sunk home two goals of their own and won the game with a score line of 2 goals to 1.