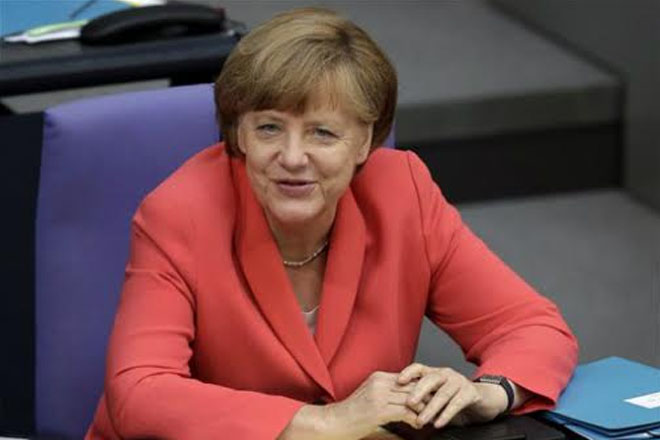 Merkel looks to shore up German support for Greek bailout

Berlin (AP) — German Chancellor Angela Merkel’s government is trying to shore up domestic support for another bailout for Greece — despite skepticism among voters and her conservative party — ahead of a key vote in Parliament this week.

Though the bailout deal is expected to pass easily in Germany’s Parliament on Wednesday thanks partially to support from Merkel’s center-left coalition partners, the German leader will likely face a rise in dissenters within her conservative CDU party.

To counter that, Merkel’s government has been talking tough on the new rescue package, insisting Greece will be supervised closely and that there will be no write-off — or “haircut” — on the loans the country owes Germany.

Merkel’s spokesman, Steffen Seibert, said Monday that while there is room to negotiate with Greece on how it deals with its massive debt, “from the German perspective, it’s a success that there’s no more talk of a (debt) haircut.”

On Sunday, Merkel said that although there is no certainty the latest bailout for Greece will succeed, she is hopeful the country can overcome its economic crisis if it sticks to the agreements forged with its creditors. Her hawkish finance minister, Wolfgang Schaeuble, spelled it out more bluntly, telling Bild newspaper on Sunday that though the bailout was a risk worth taking, “the reforms must be implemented point-by-point and we will watch closely.”

The bailout deal that Germany and other eurozone countries agreed on Friday would give the country up to 86 billion euros ($93 billion) in loans over three years in exchange for harsh spending cuts and tax hikes.

It would be the third bailout package that Greece gets from its eurozone partners in five years — all funded with taxpayer money. Germany has been the largest single contributor to Greece’s previous two bailouts, which amounted to almost 240 billion euros (currently $266 billion).

So far, Merkel’s popularity rating has kept up, thanks in part to her hard stance during the bailout talks that forced Greek Prime Minister Alexis Tsipras to back down in his demands for easier terms.

The parliamentary vote on Wednesday, however, could see a rise in dissatisfaction within her political bloc.

The German Parliament has to vote on all new rescue packages and major amendments to existing ones, and in a similar poll last month lawmakers voted 439-119, with 40 abstentions, to give the government a mandate for talks with Greece that led to Friday’s proposal.

Significantly, however, the “no” votes included 60 of the 311-strong conservative caucus — double the previous record set in February when Parliament approved a four-month extension to Greece’s previous bailout. There’s speculation there could be more conservative “no” votes on Wednesday, though the measure is still expected to easily pass.

On Monday, Vice Chancellor Sigmar Gabriel, the head of Merkel’s coalition partner Social Democrats, threw his support behind the bailout.

He wrote in a letter to party members that “the negotiated third aid program is not only better than all previous proposals, but it also distinguishes itself through the fact that all sides approached each other,” German daily Die Welt reported.

Gabriel called the prospects of stabilizing Greece economically “higher than in the last five years.”

Merkel’s government is in a bind on one key issue in the Greek bailout — the role of the International Monetary Fund.

Merkel has been keen to have the IMF contribute to the bailout, but IMF head Christine Lagarde has said that would only be possible when Germany and the rest of the eurozone agree to ease the terms of Greece’s debt by lowering interest rates and delaying repayment dates for Greek loans.

Though Merkel’s government has ruled out a debt write-off, it has indicated more flexibility on debt relief — to a degree.

“At most, there is limited room for improvement in terms of the maturities for loans or the amount of interest charged,” senior Finance Ministry official Jens Spahn told the dpa news agency.