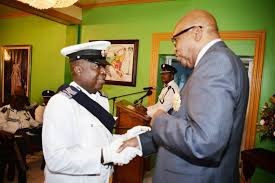 The military funeral for the late Sergeant Denzil Pemberton of the Royal St. Christopher and Nevis Police Force has been postponed

The family has confirmed that the service will instead be held on Wednesday September 24 at the Wesley Methodist Church from 1 p.m.

Sergeant Denzil Pemberton, joined the Royal St. Christopher and Nevis Police Force back in 1993 and served in the force for 26 years. He served in the National Assembly since May 2015.