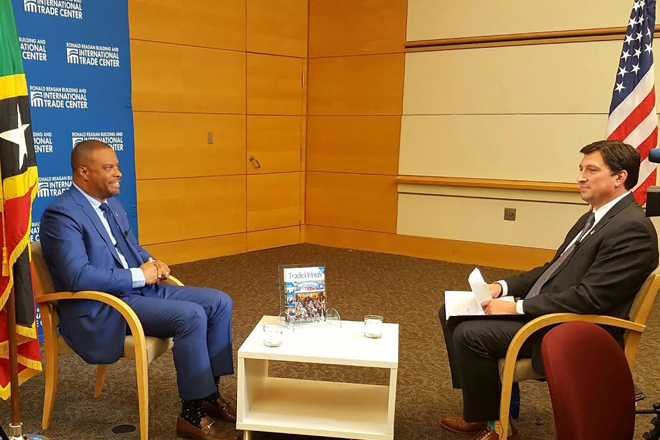 (SKNIS) — Minister of Foreign Affairs and Aviation, the Honourable Mark Brantley, represented the Federation of St. Kitts and Nevis at the third annual “Our Ocean Conference” which took place in Washington D.C., U.S.A. from September 15-16, 2016, under the theme “Our Ocean, One Future.”

Minister Brantley attended the conference at the invitation of US Secretary of State, Mr. John Kerry.

On the fringes of the conference, Minister Brantley also held high level meetings with officials of the US Treasury Department and more specifically FinCEN (Financial Crimes Enforcement Network) on deepening the level of cooperation between the United States of America and St. Kitts and Nevis.

Minister Brantley capped off his short visit with a wide ranging interview at the Ronald Reagan Building with Andrew Gelfuso. The interview will be aired online and distributed throughout the US Congress and business community. In the interview, Minister Brantley spoke to challenges facing Small Island Developing States (SIDS), investment opportunities in St. Kitts and Nevis and the ability of a small nation such as St. Kitts and Nevis to successfully navigate the complex international issues faced today.

The St. Kitts and Nevis Foreign Affairs Minister was accompanied at various meetings by Her Excellency Thelma Phillip-Browne, Ambassador to the United States of America; His Excellency Dr. Everson Hull, Ambassador, Permanent Representative to the Organization of American States (OAS); and Consul General designate to the United Arab Emirates (UAE), Mr. Justin Hawley.