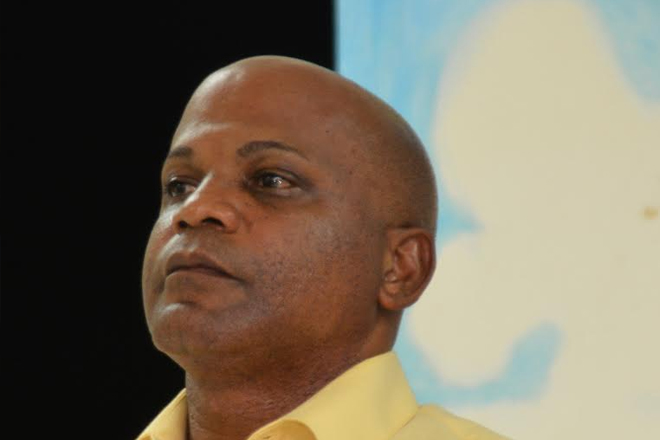 Minister Grant: Focus of Team Unity Administration is singular, to bring prosperity to the people

(SKNIS): On Thursday’s (August 11) “Discussions for Prosperity” Town Hall meeting in Sandy Point, the Honourable Lindsay Grant, Minister of Tourism, International Trade, Industry and Commerce, and Parliamentary Representative for St. Christopher #4, lauded the collegial spirit that has characterized the Team Unity Administration on the heels of its 18th month anniversary since sweeping to power in the General Elections of February 16, 2015, while underpinning that the focus of the Government is to bring prosperity to the people.

“All of us are fighting for one cause—to make sure your lives are better than they were when we got in.” said Minister Grant, as he informed the general public of the sound cohesiveness of the Team Unity Administration.

Minister Grant further praised the Administration’s successes by highlighting the accomplishments of the Government thus far and said that the Government has realized several of its major promises to the people in such a short space of time.

“We made you 200 promises…we haven’t reached two years as yet; but 47 promises have already been completed,” said Minister Grant.

He appealed with the electorate to stay focused and be patient because the Team Unity Administration is working on behalf of the people to deliver that which was promised.

“While we are focusing on doing what we have to do…all we are asking for you to do is to stay focused, be patient and it would be delivered unto you, because there is no better team than this Team Unity,” he said.

Minister Grant reminded the nation that the “Discussions for Prosperity” town hall meetings are done in the spirit of promoting transparency, accountability and good governance that the Team Unity Administration has pledged to the people by way of bringing a report card of what is being done and what has already been done for the people of the Federation of St. Kitts and Nevis.

“We are coming to you and updating you as we go along and telling you this is what we are doing, this is what we have done in the name of the people of St. Kitts and Nevis…that is a Government you want.” said Minister Grant.

Minister Grant concluded his presentation by saying that “this Cabinet is a serious Cabinet.” and that “this Government is working for you.”